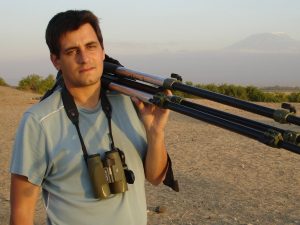 Peter Alfrey is a naturalist based at Beddington Farmlands, and is director of Little Oak, a small company specialising in nature-friendly green space management in South London

Beddington Farmlands is a 400 acre site in South London, designated a Site of Importance for Nature Conservation, is Metropolitan Open Land and has a total of over 2029 recorded species including 258 species of bird (eight red data list breeding species including Northern Lapwing and Tree Sparrow and nationally important wintering populations of Green Sandpiper, Caspian Gull and Water Pipit) , 526 species of moths and butterflies, 361 species of diptera, 262 species of coleoptera and 99 species of hymenoptera.

In 1995 Viridor, a waste management company, applied for permission to landfill the area on the condition that it would be restored to a public nature reserve by 2015. Following a Public Enquiry, permission was granted with attached conditions including the creation of a number of biodiversity action plan habitats such as Wet grassland, Acid grassland and reed beds. A comprehensive Conservation Management Plan was drawn up and various target species for conservation were selected to monitor the success of the restoration.

In 2005, Viridor applied for permission to extend waste management on site until 2023, delaying the opening of the public nature reserve and in 2012 they applied to build a 300,000 tonne incinerator on the site of the wet grassland. Following local widespread opposition, permission was granted to build the incinerator in 2013, the case went to judicial review in 2014, the courts ruled in favour of the one billion pound contract and work commenced in 2015.

Concurrent to the judicial review there was also a formal complaint made to the local government ombudsman regarding the lack of enforcement of planning conditions from Viridor and the resulting ecological collapse of Beddington Farmlands. Table 1 shows the lack of restoration implementation and Table 2 shows the results of that lack of implementation with a collapse in the population of the majority of target species.  The Local Government Ombudsman ruled that despite the delay in restoration and resulting loss of important wildlife communities the fault did not fall on the council and the Ombudsman closed the case in 2015 and also decided not to make the results of the case public.

Perhaps symbolic to the shambolic failure of the local planning system, in 2014 the Tree Sparrow, (the iconic species of Beddington, the mascot of the local naturalist community),  population crashed to only one pair, where as recent as 2007 there had been a thousand  birds in the post breeding season.

At present the situation at Beddington Farmlands is still in a dire state. There have been some verbal gestures by Viridor to improve the situation and the council have pledged to be encouraging Viridor to fulfil their planning obligations in the future but to date there have been no fundamental changes and the situation continues to decline, with new threats on the horizon including the de-designation of Metropolitan Open Land along the east boundary of the site and the phasing out of sewage disposal in an area that makes up nearly 50% of the Site of Importance for Nature Conservation.

In short, Beddington Farmlands represent a very good example of complete planning system failure in protecting wildlife and a demonstration that it is possible for a private corporation to almost completely wriggle out of their social and environmental obligations without any serious effects on their rolling agendas. It is also a case study of commercial ecologists assisting in that destruction and a demonstration of the ineffectiveness of local authority to have any control of a commercial corporation when it comes to biodiversity obligations.

For biodiversity and for the potential of Beddington Farmlands being a major urban nature reserve in South London all seems nearly lost. A nature reserve with the potential to create immense social benefit for the local community and preserve one of the most important areas in London for wildlife, ranking with Rainham and the London Wetland Centre as the most important area for birds in London (but falling behind drastically fast).  What will probably remain in the future is some kind of view of nature that Viridor feel is appropriate – a waste management company’s idea of what nature is-a few pools of water and something that looks green – with a few ducks and swans on the lakes. The biodiversity action plan habitats have not been created, the target species have all but been lost and there have been no legally binding commitments to any fundamental changes to imply anything in the future will be different – the only commitments made have been verbal, which if the past is anything to go by is at best appeasement and at worst blatant deceit.

Ironically Viridor are responsible for the major funding, through the Viridor Credits scheme, of some of the major conservation organisations, including the RSPB, the Wildfowl and Wetlands Trust and the Wildlife Trusts. All these organisations have kept considerable distance in the Battle for Beddington- another indication of the scale of the failure of the planning system, where developers have more or less complete control over local communities and the environment.

Beddington Farmlands is a glimpse of the future for the rest of the UK, if democracy continues to be eroded by profiteering career ecologists, lawyers, incompetent local authorities and walking dead local communities. In many ways the commercial corporations are just doing their job – the blame arguably lies predominately with the conservation community for selling out. The Battle for Beddington Farmlands has been lost in a catastrophic way, the rest of the UK is next unless something radical changes and the conservation community remodels itself away from its reliance on corporate funding to survive, the same corporations which are destroying the environment on  a catastrophic scale.

On a personal level I’m preparing to ship out – just another ecological refugee of the Sixth Extinction?

* = not proposed so no date

31 Replies to “Guest blog – The battle for Beddington Farmlands (lost?) by Peter Alfrey”