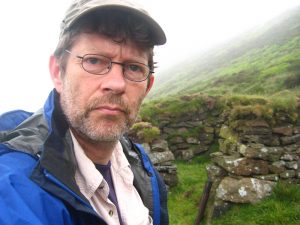 Nick Moyes is former Senior Keeper of Natural History at Derby Museum; co-author of The Flora of Derbyshire, and technical advisor to the Derby Cathedral Peregrine Project, which he helped set up. He is currently campaigning to get The Sanctuary LNR restored by Derby City Council, and advises on biodiversity action plans across Lowland Derbyshire. He is a keen walker, mountaineer and Wikipedian, and his family have been National Trust members for some 15 years.

It was 5:30am. Overhead, the piping call of a curlew roused me from my slumber amongst the soft bilberry and heather of Kinder Scout‘s plateau; the night’s rain and wind had finally passed over, and my bivouac bag had weathered it well. I had arrived late on Thursday night, just as darkness fell at Crookstone Knoll, and had made a low impact – albeit slightly elicit – stopover on Kinder’s extreme eastern end. I’d come to see for myself how grouse shooting was impacting on the landscape here.

The second wonderful thing to wake to was news on Twitter that the National Trust had just announced it was terminating the lease of one of its shooting tenants in the Hope Woodlands Estate (the bit I had been sleeping on!) This amazing news came after the release of a video of a camouflaged gamekeeper with a gun and plastic hen harrier decoy on land owned by the Trust. Pressure on the organisation to act had mounted over recent weeks, not only on my old colleague, Jon Stewart, who now works for the National Trust, but also on Helen Ghosh, the Trust’s Director-General, who many people had contacted to demand action. To their immense credit the NT had finally come out with a statement (reproduced here) in favour of evicting this shooting tenant on the grounds that their activities were no longer compatible with the Trust’s vision for the Dark Peak moors.  This was wonderful news indeed. The long process of seeking a new tenant would begin in 2017.

All week I had been saying that I felt the next Hen Harrier Day on Sunday August 7th in Derbyshire needed a stronger, more clearly defined and achievable focus. And here now is the opportunity to ask (demand?) that the National Trust go one step further than their surprisingly wonderful statement last Friday.

We need to tell the National Trust to remove all the shooting butts from their land in
the Dark Peak SSSI/SAC/SPA (Special Protection Area). Kinder should be the start.

It makes no sense to me to spend immense sums of money on gully-blocking, re-wetting and restoring the western side of the Kinder Scout plateau, whilst on its eastern arm the shooting tenants (now presumably given notice to quit) have continued to burn the deep peat just to encourage heather for their grouse, and then dig pits for their trays of medicated grit to keep the birds healthy (prior, of course, to being shot by well-to-do lines of gunmen hiding in grouse butts after 12th August each year). I earnestly believe there should be no shooting whatsoever on any part of the Kinder Scout part of the Dark Peak SSSI/SPA. I would then like to see management for grouse-shooting removed from all National Trust land within the Dark Peak SSSI.

So, as I offered myself up as breakfast to the multitude of moorland midges, I made a note of the damage being done on Kinder in the name of driven grouse shooting. Below me at Crookstone Knoll, the biggest symbol of this was the line of grouse-shooting butts that emerged through the early morning mist towards me from the Snake Pass road. These symbols of greed, folly and moorland mismanagement really have no place at all today on the slopes around the Kinder Scout plateau. This part of the Dark Peak SSSI is one of our most heavily cherished ecological habitats, given special UK and European protection as an SSSI, an SAC and an SPA. Yet all around me there were signs of moorland habitat mismanagement – funded by HLS payments – but seeming to me to run totally counter to the good work being done elsewhere on Kinder by the National Trust, the Peak Park, and the Moors for the Future  project. Numerous areas of burnt heather and white-tipped posts marked the location of plastic trays of medicated grit, many placed into holes dug into the ancient peat. Just look at the vast swathes of burnt moorland on the eastern side of the Kinder Scout plateau on this Google satellite view.

Kick the Butts Out Of Kinder Scout! No shooting on this part of the Dark Peak SSSI/SAC/SPA

It was 1932 when the Kinder Mass Trespass took place. The common man demanded access to the wild landscapes that had hitherto been denied them. Today it is the gamekeepers and shooting tenants who are now the trespassers here. And this time there is no place for them – they have no moral right here, even if some do still have a lease. With their guns, their medicated grit, their moorland burning, their snares and their stink pits – and sometimes even their poisons and snipers – they trespass onto these landscapes and do our wild places no good. Evidence of the damage that intensive grouse farming causes was all around on this, the extreme eastern arm of the Kinder Scout plateau and SSSI.

The shooting butts should not be here at all; they make a mockery of the moorland restoration efforts being done further west on Kinder.

It would take just a few hours with a sturdy crowbar to Kick the Butts Out of Kinder Scout. We should seek to scatter these stones, or turn these places into simple cairns – monuments to the folly and anachronism of intensive grouse farming on what is undoubtedly the Peak District’s most well-known and valued wild place. We need the National Trust to take this further action in order to demonstrate a desire never to see grouse shooting on any part of the Kinder Scout again. It should create at least one shooting-free area on its land-holdings, and to do so on behalf of the vast majority of its members who, like me, care about a better landscape, rich in wildlife and delivering healthy ecosystem services for everyone’s benefit. Carbon sequestration by the peat; the retention of water and reduction of flooding downstream in the cities of Derby and Nottingham are just two of many services a more healthily managed moorland will deliver.

If you want to contact The National Trust you can email Dame Helen Ghosh, or Jon Stewart, and praise them for their action thus far, but why not also invite them to Kick the Butts out of Kinder Scout! and make this the first bit of the Dark Peak SSSI/SAC/SPA to be a completely lead-free zone?

With Natalie Bennett from the Green Party attending Hen Harrier Day in Edale this year, as well as our new Police and Crime Commissioner, Hardyal Singh Dhindsa, now is the ideal opportunity to both publicly applaud the National Trust for taking a firm line with one of their wayward shooting tenants, but also to call for one more small, but achievable action: Kick the Butts out of Kinder Scout!

I want to see all moorland management for grouse-shooting halted on National Trust land within the Dark Peak SSSI/SAC/SPA. Removing all 53 of the shooting butts around Kinder Scout should be our first goal.