RSPB Scotland has issued an appeal for information following the disappearance of another young golden eagle, the eighth of this species to vanish in the same area in less than five years. The young female golden eagle, named Brodie, hatched two years ago and was fitted with a satellite transmitter shortly before she fledged from her nest. Brodie was being monitored by conservationists as part of a national study to improve our understanding of the movements and survival of young golden eagles. Her last recorded position placed her in the northern Monadhliath mountains, south east of Inverness on 2nd July this year.

Since November 2011, eight golden eagles, all less than three years old, fitted with satellite transmitters have disappeared in the same area. The birds were being monitored by RSPB Scotland, the Highland Foundation for Wildlife, Natural Research Ltd and Forestry Commission Scotland. Satellite transmitters are increasingly being used to study the movements of wild birds to gain an understanding of their behaviour and travels following fledging. They are fitted under special licence by a small number of highly accredited individuals, and golden eagle experts. Satellites continue to transmit if a transmitter becomes detached from a bird, or if a tagged bird dies naturally allowing recovery of the body. 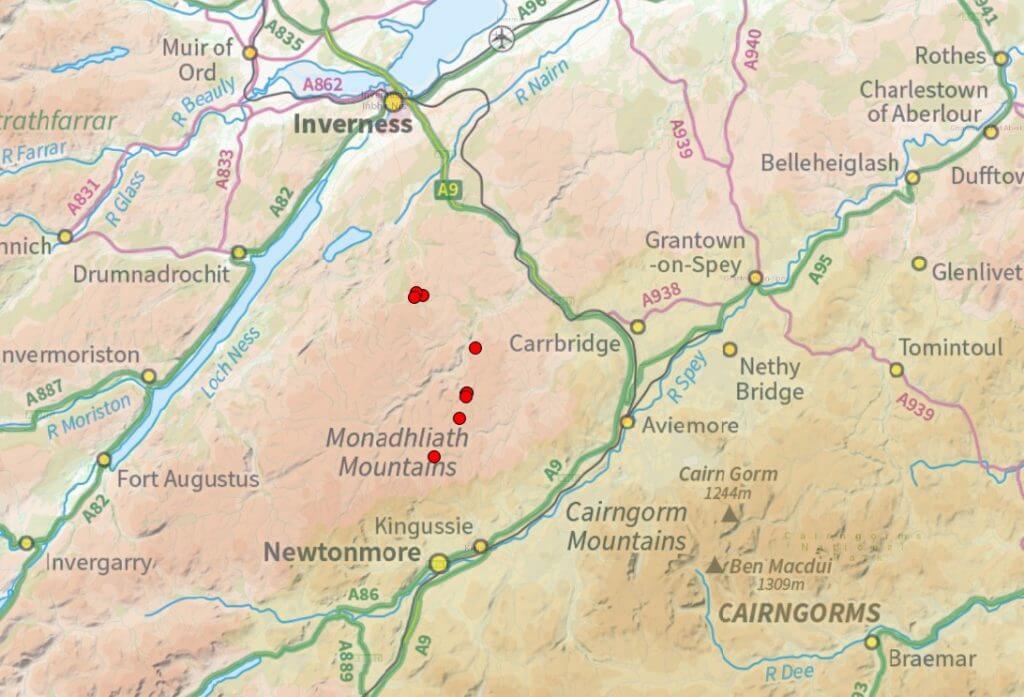 Despite comprehensive searches, under the authority of the Police, of the areas around the last recorded positions of all eight eagles none of the birds or transmitters have been recovered, and no further data has been received from the transmitters. The first eagle vanished after last being recorded in the hills above Strathdearn in November 2011; following this a second disappeared in July 2012, and a third in March 2014. In October 2014, transmissions from two further eagles stopped at another location across the valley, three weeks apart. Three eagles’ tags stopped transmitting at a scatter of locations in the hills above the River Findhorn, in May, June and the latest bird, Brodie, in early July this year [1].

Since satellite transmitters first began to be fitted to raptors in Scotland around ten years ago several tagged birds were subsequently found to have been illegally killed [2]. All had been poisoned except for one which had been caught and injured in an illegal trap prior to being deliberately moved to another location. More recently, tagged birds have tended to go off the radar [3]. In every case, data received from the transmitters prior to their disappearance indicated the tags were functioning correctly, before suddenly stopping.

The golden eagle that disappeared in May 2016, a young female, had fledged from a nest in Galloway in 2015, one of only two fledged young from the tiny population of this species in the south of Scotland that year. The golden eagles in this area do not tend to leave the south of Scotland and so it was very unusual that this young bird roamed north rather than exploiting the vacant territories close to where she fledged. 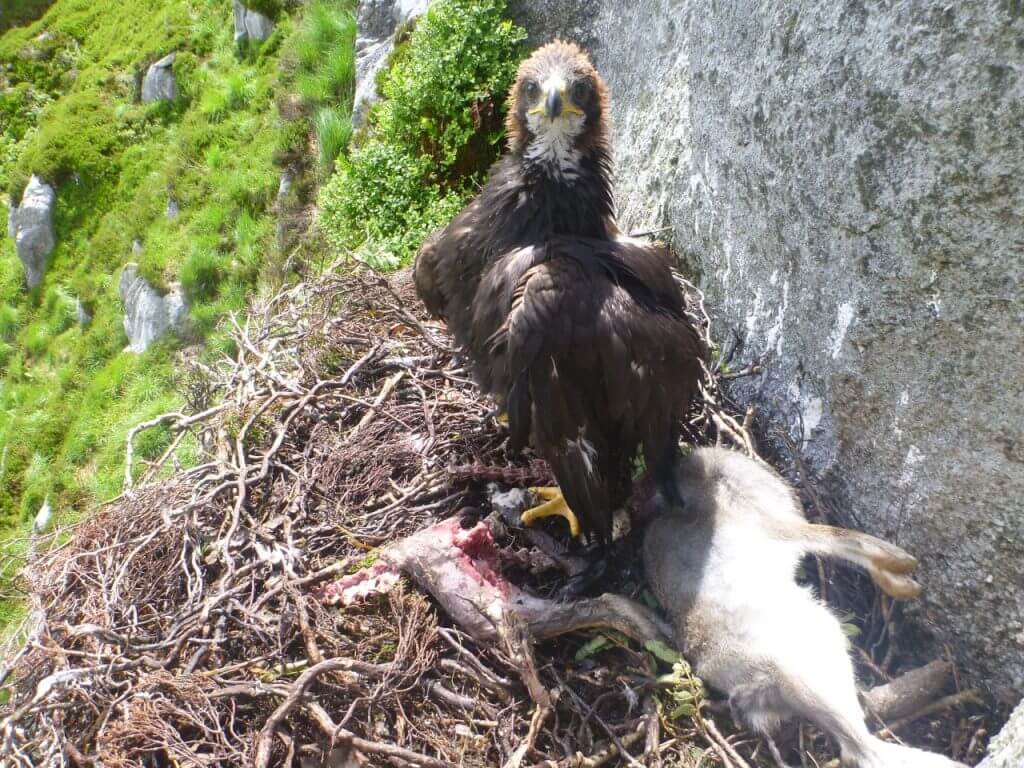 Dave Anderson from the Scottish Raptor Study Group, who tagged this eagle said: ‘I was privileged to satellite-tag this large female chick in July 2015 with a fellow member of the SRSG who monitors the site. This bird was the first successful fledging from any nest in this area since 2010. The data we were receiving from her was of great interest as we followed her journey northwards to Cairngorms National Park, with excellent location information.

We were looking forward to seeing if she would head south again later in the year, however the tag stopped transmitting abruptly on the 18th May 2016, shortly after her first birthday. This is a very sad end to arguably one of the most important golden eagle chicks fledged that year in Scotland. There are no words to describe how disappointed I am at this bird’s disappearance.‘.

RSPB Scotland’s Head of Investigations, Ian Thomson, said ‘It is surely no coincidence that the overwhelming majority of satellite-tagged birds of prey that have disappeared in Scotland have been in areas intensively managed for gamebird shooting and in areas that have an appalling previous record of confirmed incidents of raptor persecution. These eight birds have all disappeared in an area where driven grouse moor management dominates the landscape, and where there have been many previous cases of illegal killing of protected raptors, including the poisoning of a golden eagle and a white-tailed eagle as recently as 2010 [4].

Given the reliability of the transmitters, the chance of so many birds disappearing over such a short timescale without some kind of human interference is so small as to be negligible. The pattern we see here is consistent with the birds having been killed and the transmitters destroyed.

Once again, the commendable positive efforts of those landowners and estates who welcome golden eagles and host their nesting attempts, including elsewhere in the Monadhliaths, are being catastrophically undermined by those who have a complete disregard for the law, and who continue to threaten the conservation status of these magnificent birds. All of these eagles were young birds exploring Scotland before establishing their own territories and with their disappearance any potential future breeding by them to aid the population’s recovery is also lost.

We ask that if anyone can provide information as to the fate of these eagles that they contact Police Scotland or RSPB Scotland’s investigations team.‘.

The RSPB in Scotland is supporting a Scottish Raptor Study Group petition to the Scottish Parliament to license gamebird shooting – it has just over 3100 signatures online and closes on 22 August.

I have a UK-wide petition which has 82,000 signatures in favour of banning driven grouse shooting and which closes on 20 September.

17 Replies to “Golden Eagles disappear too – mostly over grouse moors”