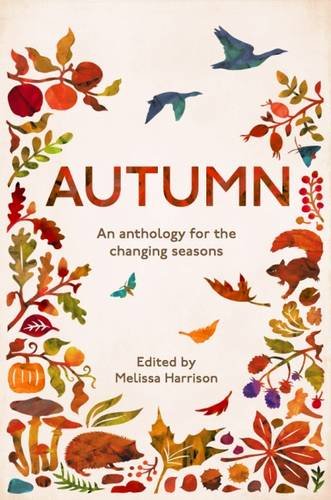 I’ve reviewed Spring and Summer here, and liked them, so it won’t be a surprise that I enjoyed Autumn too.

The book follows the same model as the earlier two seasons – an anthology of writings from famous writers mixed in with offerings from current writers.  It’s still a good model and worked as well as ever in this season.

Nobody really likes autumn – do they? It’s the worst of all seasons – not as warm and sunny as summer and not as cold and sunny as winter and not a season of promise like spring. Autumn is only redeemed by those odd days that remind one of what is slipping away or those that promise a proper winter to come. All that dankness and the utter shock of when the days are suddenly dented as the clocks go back! Yuk!

Whereas spring is heralded by Chiffchaff song, Snowdrops and Brimstones, autumn sees the slow seeping away of most visible forms of nature as wildlife dies, migrates, pupates or hibernates.

Even the birds, the most obvious form of life, apart from those large dead-looking things known as trees, mostly just slowly fade away and are replaced by a few foreign thrushes and lots of ducks and geese.  You don’t hear people talking (much) about the arrival of the Redwings like they do about the Swifts, or that of the Wigeon like they do of the Cuckoo, do you?  For some birders, the great compensation is that the storms crossing the Atlantic that may cause havoc for travellers and businesses may deposit a few Yankee rarities on western facing coasts and islands – an  American warbler or Least Sandpiper can cheer up the gloomiest of autumns.

Autumn’s saving grace is that all that productivity of spring and summer is now laid out for us to exploit. We can go fox-hunting (at least, we could), wildfowling, shooting Pheasants, picking mushrooms (but not in the New Forest and look out for the toadstools!), apples, sloes and blackberries. Oh yes, and we can play conkers.  And there are a few days when, sometimes, the autumn colours are nearly as good as a the fall colors in a poor year in New England – but even then you have to be lucky. Get your timing wrong and the wind has stripped the trees of all their colourful leaves which rarely look as good on the floor as they do on the trees.

So autumn presents a challenge to the nature writer. How does this book cope? Pretty well really.

There is not that much about mists (and I’d have liked rather more on mellow fruitfulness) and very little about the fun of going out with your gun to kill some birds. It’s surely not that long ago when such an anthology would have had a lot of accounts of your real countryman stepping out to kill wild creatures.  I would have liked some more of that, if only for old times’ sake and because there is some fine writing on the subject.

Instead we have a collection of tales, some of which are not really particularly autumnal, that will delight the naturalist and provide consolation in these unsatisfying months. Daphne Pleace’s stags, Jon Dunn’s missing chickens, Julian Jones in the kitchen and John Lewis-Stempell’s walk in woods stood out for me amongst the modern works and I liked the passages by the Woodhope Naturalists’ Field Club (1887), Clare Leighton (1933) and of course John Clare and Dylan Thomas too, from the older selections.

There’s not quite enough poetry in these anthologies for me but Matt Merritt’s Evidence (Long-eared Owls) is a gem.

Autumn: an anthology for the changing seasons, edited by Melissa Harrison, is published by The Wildlife Trusts.