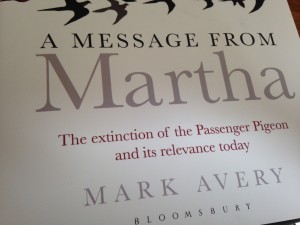 A Message from Martha has appeared in another couple of ‘book of the year’ lists this week.

First Bel Mooney included A Message from Martha in her nature books of the year in the Daily Mail  and then  Barbara Kiser included it in her list of bird books in Nature.com.

It’s always nice to see one’s book featured in these lists, and they are in addition to being selected as the Sunday Express Bird Book of the Year and listed by @grrlscientist and Stephen Moss in separate Guardian listings.

I’ll be in Cambridge later today and I’m sure I’ll be popping into a couple of bookshops there to have a look for late Christmas presents and to check whether I can spot any Passenger Pigeons.

I finished writing A Message from Martha 15 months ago. I have until the end of January to finish another book so that will be how I spend some of my Christmas, and New Year.