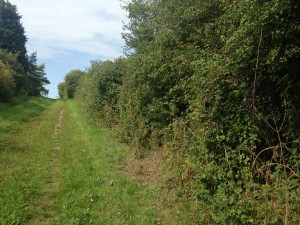 The sun was shining yesterday lunch time so I thought I’d go out and pick some blackberries – I’d been in Canterbury on Saturday and then it had rained on Sunday, so the weekend had not been a harvesting opportunity. I think others must have been similarly occupied or put off because the hedgerows were blackbery rich – and black blackberry rich to boot!

But I sat in the car listening to radio 4’s World at One rather than picking blackberries as the new shadow Defra SoS, Kerry McCarthy, was talking about national anthems, potential defections of right wing Labour MPs to the Conservatives (which would simply confirm what the public had been saying about the Labour Party of recent years that it was Tory-light) and then about her new role.

You can hear that latter bit here (after c35 mins).

I was impressed. She is right, that being against the current planned badger cull is the rational approach as it is not a good way to reduce the amount of bovine TB. You don’t have to be a vegan to recognise that, you could lick your lips at the thought of eating a badger and still think that, because the science says that.

She is right, that Defra ministers have too often looked like NFU mouthpieces and that is wrong.

She is right to say that the Defra brief is a broad one and that it is about much more than farming.

She is right that David Cameron made a bizarre choice when picking a climate change sceptic (or denier?) in Owen Paterson as SoS – and lived to regret it, methinks.

She is right to highlight her experience, involvement and commitment in this area. Kerry McCarthy will have a lot to learn but there is every indication that she can and will.

It was a confident assured performance right across the board.

By the time I’d sat through all that the sun had gone out but I just had time to pick an ice-cream tub full of blackberries before the first spots of rain started to fall.

3 Replies to “New Shadow Defra SoS on World at One”