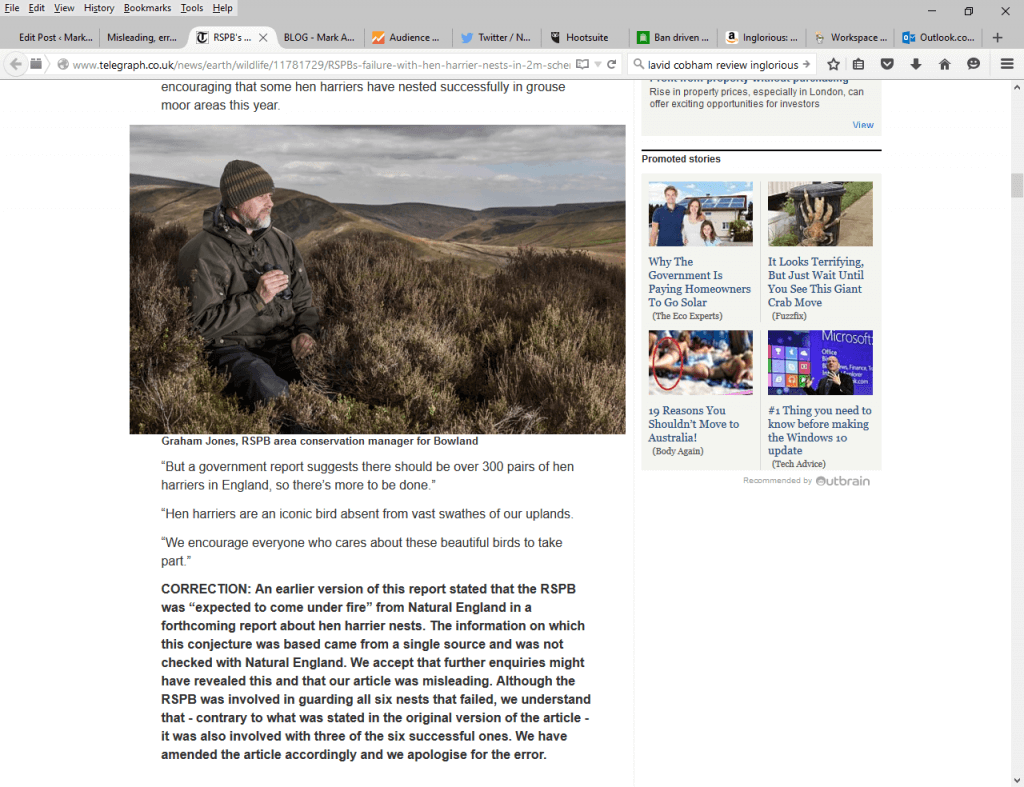 Yesterday the Daily Telegraph admitted errors of reporting (see previous blogs: We’re not really the complaining type but… 14 August, A lie can travel… 6 August, It gets worse, or better, depending which side you are on 5 August, You forgot the truth 4 August) about the RSPB and Hen Harrier nests after a number of readers of this blog (and others no doubt) complained to the Independent Press Standards Organisation.

This is the correction and apology:

CORRECTION: An earlier version of this report stated that the RSPB was “expected to come under fire” from Natural England in a forthcoming report about hen harrier nests. The information on which this conjecture was based came from a single source and was not checked with Natural England. We accept that further enquiries might have revealed this and that our article was misleading. Although the RSPB was involved in guarding all six nests that failed, we understand that – contrary to what was stated in the original version of the article – it was also involved with three of the six successful ones. We have amended the article accordingly and we apologise for the error.

If you have a good memory you will see that quotes from Ian Gregory of You Forgot the Birds attacking the RSPB have also been removed.

Today’s Daily Telegraph should carry the same correction and apology on page 2 (if not today, then soon).

The Daily Telegraph has admitted that it did not check its facts and that as a result its coverage was misleading, and it has apologised for these errors.

That’s a small victory for truth and for the readers of this blog. It wasn’t my idea to contact IPSO – that came from Hugh Webster  (in a comment on this blog) – we should thank Hugh for taking the lead which many of us followed.

I posted my complaint on here but was asked to remove it by IPSO as part of the resolution process – so I did.

So, the Daily Telegraph took information from one source, You Forgot the Birds, and printed it unchecked. It didn’t wait until the ‘government report’ (which was a Natural England press release) came out and it didn’t check with Natural England.  It took an account of the Hen Harrier breeding season from a pressure group (funded by the British grouse industry) that it should have known, must have known, was antipathetic to the RSPB and published that same source’s criticisms of the RSPB.  This was terribly poor journalism and it’s right that the Daily Telegraph has corrected its error. Let us hope it remembers this case when it deals with other stories from this or other sources with an agenda.

And let us hope that this case may also serve as a warning to other newspapers and media outlets to be careful about checking accounts fed to them.

The Daily Telegraph eventually came to the view, once challenged very strongly by many people, that it had made a mistake for which it should apologise. It maybe could have arrived at that point quicker, but it got there in the end.

I am very grateful to the staff of IPSO who handled the process sensitively and with politeness and skill.  IPSO has been criticised by some but my experience of it, limited to this case, has been entirely positive. If only Defra moved with the same speed and purpose as IPSO then the world would be a better place.

You Forgot the Birds is funded by the British grouse industry – an industry that we would be better off without – please sign the e-petition to ban driven grouse shooting.