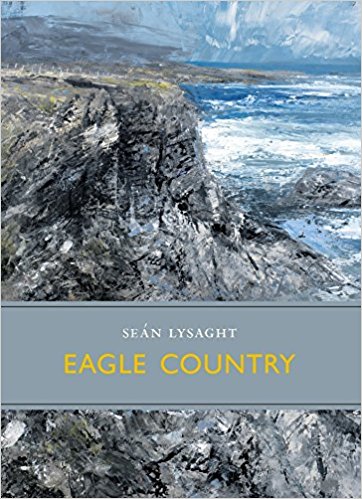 Seán Lysaght is a poet and writer and he brings his poet’s eye for observation to this exploration of his home country of Mayo and the wider west coast of Ireland.

Spurred on by an interest in eagles and the tragic history of the two species in Ireland he trawls the literature and place names on maps to find remote sites where they clung to survival at the start of the 20th century. He then visits these sites during a long summer season, sometimes driving with his wife but often trekking alone into remote back-country, to get a feel for the places where eagles once lived. A series of double-page black and white photographs of some of the landscapes he visits offer an entry point to the chapters, each of which covers one month of the summer.

The book has a gentle pace to it and the writing is warm and engaging. You feel as if you are strolling alongside him as he describes his route, the weather, his impressions of the landscape and his encounters with wildlife, including the occasional eagle from one of the reintroduced populations. The book is mainly about wildlife and wild places, but he also touches on Irish history, literature, politics and environmental issues as they become relevant to the landscapes he walks through, or the people he meets along the way. The twin blight of overgrazing and intensive forestry is an inescapable, recurring theme.

I share his love of remote places and particularly enjoyed his take on the way some of Ireland’s most stunning coastal sites have been wrecked by catering for the mass visitor experience – ‘marketed and branded out of existence’ as he so eloquently puts it. With apologies to the RSPB I couldn’t help but think of places like Minsmere and Titchwell – sites that support wildlife in abundance and to which people either gravitate towards or avoid like the plague, depending on disposition. There is a need for such places but it would be tragic if, in future, they were the only option for those seeking out wildlife and wild places.

Many of Lysaght’s explorations end up homing in on potential eagle nest sites – mountain ledges sufficiently sheltered, remote and inaccessible to have supported generations of eagles down the centuries, secure from the elements and (at least for a time) from human intrusion. He is always aware that these sites could potentially be reoccupied, quoting the old eagle watcher’s adage ‘once an eagle rock, always an eagle rock’.

In the coming years, he may be able to match his observations against the choices the birds make for themselves if they are able to reclaim lost territories. In the final, and for me most interesting, chapter he deals with this question when visiting the Donegal Golden Eagle reintroduction project; talking at length with Lorcan O’Toole from the Golden Eagle Trust as they visit a nest site. The short answer is ‘very possibly’ for the Sea Eagle but ‘perhaps not for a while yet’ when it comes to the Golden Eagle. The long answer is well worth reading, as is the rest of this engaging book.