Lack of research, weak regulation and a mix of over 150 pesticides – all the ingredients needed for a harmful cocktail of chemicals used in our countryside 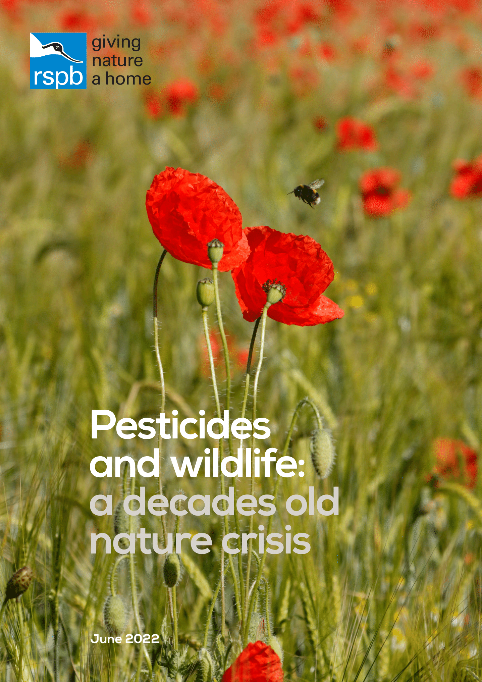 Today, the RSPB has published a comprehensive review of studies looking at the harmful effect of pesticides  on wildlife and sets out why the current risk assessments are not protecting wildlife from these chemicals.

The report comes 60 years after Rachel Carson published Silent Spring, the world’s first wake-up call that pesticides were having unexpected, and previously unknown, side effects on wildlife and people. Six decades later over 150 different pesticides are used across the UK’s countryside in a combined quantity that could cover all UK farmland over ten times every year. However, the RSPB’s review reveals that there are still major gaps in the understanding of what this combination of chemicals is doing to our land, wildlife and food chains.

This is of grave concern to the public, as 72 per cent of land in the UK is managed for agriculture with a third of this being used for growing crops and we need our politicians to take action on this. Arable farmland is the type of land where the nature crisis is being felt most keenly where populations of farmland birds have more than halved on average since 1970. Both within the UK and across Europe insect populations are showing dramatic declines, and not just within those species being targeted by pesticides.

This is all within the wider context revealed by the most recent State of Nature Report which shows that that around half of UK species are declining and 15 per cent are at threat of extinction. The report listed agricultural management as one of the main drivers of wildlife decline in the UK.

The RSPB’s  comprehensive search through the published literature, found that the negative impacts of only a few specific pesticides were well understood. In a search relating to the 30 most used pesticides in the UK, 70% of the articles related to just four chemicals. Ten of these 30 pesticides had fewer than 6 studies, and 16 (including several, highly hazardous pesticides) had not been subject to a literature review. This illustrates the very limited understanding of the real-world impacts of many of our most widely used pesticides. The review also highlights the severe lack of understanding of the possible interactive effects that multiple chemicals can have on wildlife, or so called ‘cocktail effects’.

The review makes very clear that pesticides do have an inevitable negative impact on wildlife beyond the pest species they are targeting. This is because they are rarely specific to the target pest species, they find their way beyond the area they have been applied to – contaminating nearby habitats – and because they persist in the environment for weeks, months or even years after their use.

The risk assessment process does not adequately assess the real-world impacts of pesticides. For example, it does not take into account long-term, chronic effects of chemicals of long-term exposure, nor does it account for the fact that wildlife is exposed to a cocktail of chemicals as it focusses on just one active substance at a time. It also does not measure important behavioural effects, such as the impact of neonicotinoids on the ability of honeybees to navigate back to their hive, or the impact on the food chain of removing plants or insects which animals like birds and mammals rely on.

Katie-Jo Luxton the RSPB’s director for conservation said: “We have sleepwalked into pesticides being the norm in terms of the way we manage land, believing every problem can be solved with chemicals. The combination of lack of research, inadequate risk assessment and weak regulation has created a toxic situation where an unchecked cocktail of different chemicals are regularly applied across our countryside, without regard to harm on wildlife and the wider natural environment.

What we do know is extremely worrying, but clearly is just the very tip of an iceberg of understanding about the impacts of pesticides on our wildlife; above land, below it and in our rivers and seas.

We also know that our farmland wildlife is in decline, underlined by last week’s announcement that there are just 2,100 pairs of turtle doves left in the UK down from 125,000 pairs in the 1970s. Many innovative farmers are finding ways to work with nature to reduce their reliance on pesticides while still producing healthy and profitable food. With the right support from Government many more farmers can be encouraged to do the same.  With farmers help, we can halt wildlife decline and keep common species common and avoid extinction.”

The RSPB is making five recommendations to the governments of the UK:

And away from farmland, gardeners and other landowners can do their part:

To find out more about how the RSPB is working with landowners to promote nature friendly farming visit: https://www.rspb.org.uk/our-work/conservation/conservation-and-sustainability/farming/