I’ve spent much of the last four days in the Black Hills of Dakota in Western South Dakota.  Some of it in rain, some with a flat tyre, but even so I can see why Doris Day wanted to go back.  Maybe she hadn’t quite seen all the region’s birds either.

But I will probably remember best other moments.  The party of Yellow-rumped Warblers, about 30 of them, mostly males, and presumably newly arrived as they were not territorial, moving through the trees and looking gorgeous.  And the half hour spent sitting by a lake watching hundreds of swallows fly past to within about six feet. There were our Swallows (Barn Swallows – though noticeably more orange underneath), Cliff Swallows (more like the European Red-rumped Swallow), Tree Swallows (a bit like a large House Martin but without a white rump) and, although it took me a while to realise, Violet-green Swallows too (with a thin white rump).

The gold of the Black Hills led to the US Government breaking several treaties with the native Americans as prospectors headed West into Indian land and to towns such as Deadwood.  These hills were and are precious and sacred to the native Americans, who knew about the gold but also knew you couldn’t do much with gold so didn’t overrate it in the way that European Americans did.  I feel I have tapped into rich seams of wildlife and scenery here but have left each to future travellers to find for themselves again. 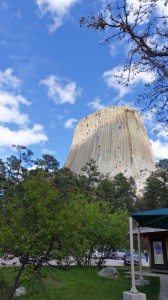 In film terms I have moved from South Dakota where fellow Bristolian, Cary Grant, climbed over faces in North by Northwest, to close encounters with Black-tailed Prairie Dogs at Devil’s Tower in Wyoming, to Montana where the plains are wide and rivers run through them.

And the soundtrack has been Bob Seger’s greatest hits – and will be today too.