Skip to content
I’m standing on the prairie in Montana and the sun is shining. Prairie is a wonderful thing – it’s a work of art and a work of technology.
The technology bit is that prairie acts like a finely designed machine. The grasses and flowers that make it up, hundreds of different species, are well-adapted to the soil, the weather, the grazing animals – everything that makes up Montana, or Wyoming, or the Dakotas, or what did make up over a half of the American land mass a couple of centuries ago, and of which only about 2% survives.

Prairie plants are adapted to fire – which is a frequent event out here – caused by lightening. Their long roots allow them to find water and more than half of their biomass is below the surface so that when fire rushes across the prairies the native plants can spring up soon after the earth cools.

It’s a system that works well, and produces great beauty. Up here in Montana it feels like spring even on 1 June. The cottonwood along the rivers is just leafing up and the prairie flowers are blooming in blues, yellows and whites.

And these flowers and grasses support the bison, the pronghorn antelope (I can see one from where I am standing) and all those sparrows and Killdeers, Brown-headed Cowbirds and Western Kingbirds. Maybe because it is a lovely warm day I can also see lots of butterflies moving over the grassland – mostly one yellow species called the Pink-edged Sulphur, and many of them heading east as though they have somewhere to go.

A yellow butterfly passes by a white gravestone on the prairie, marking the spot where a young 7th cavalryman died and then passes a browner stone marking the deathplace of a young Lakota brave, for this is the battlefield of the Little Bighorn where the native Americans won a pyrrhic victory against the might of the US Government in a war that ended in defeat for their way of life. 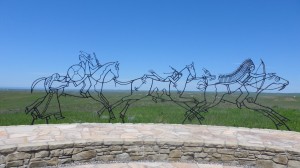 The site is sensitively and clearly interpreted on foot and by car. It is easy to imagine the fear of the cavalrymen when they realised they had attacked a large and well-armed native American settlement. The cavalry retreated up the hill, Custer’s men were separated and maybe could have regrouped but they failed to do so. Custer’s own troop, including his brother, were isolated, surrounded and killed their own horses to make a last stand on a conical knoll. But the indian forces overwhelmed them and around 270 European Americans died on this prairie on 25 and 26 June 1876. Fewer native Americans died and there was great rejoicing among Sitting Bull’s people.

Were there Pink-edged Sulphur butterflies passing across the battlefield on that June day 135 years ago? Did pronghorns pause their grazing to scan the firefight below them? And was the song of the Western Meadowlark the last sound heard by some dying men? And why have the prairies been valued ever since for the blood of a few hundred men and yet not for their beauty and perfection away from where human blood was spilled?

4 Replies to “On the Montana prairie”