We set off from West Bay with high hopes – Skipper Ian, Diver Dave, Biologist Tom and Ballast Mark.  Huntress II passed the beach on which Reginald Perrin stripped and headed into the waves but we were going out into Lyme Bay in search of marine life – which was appropriate since I was getting an insider view of the work of MARINElife. 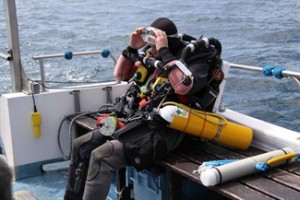 MARINElife has pioneered the collection of sightings of cetaceans and seabirds at sea and collates huge amounts of information that would otherwise never be collected or would be lost.

We were  hoping to see some of the rich marine life of Lyme Bay – marine life which should become even richer with the restrictions on bottom-trawling introduced by Defra in 2008.

Perhaps the south coast of England isn’t everyone’s idea of the best place to see marine life but MARINElife’s work here has shown that it is actually very important for a range of cetaceans such as harbour porpoise and bottle-nosed dolphin but also for seabirds where the star bird is probably the endangered Balearic shearwater.  Our main hope for the day was to see white-beaked dolphins – a cold water species which, surprisingly, has been shown to have a hot-spot of sightings in Lyme Bay.

But the serious part of the day was that Dave the Diver was going to fix a listening device to a wrecked ship, 50m down, which would record dolphin activity for about a month.  Twenty-six miles south of Dorset and 12 miles east of Devon we found the wreck and Dave headed under the waves.  An hour later he was back on board – I hadn’t met Dave before but I admit to feeling a bit nervous for him while he was gone.

When I asked him what it had been like down there he said ‘****ing hideous’ but he described the visibility as being quite good and there being lots of fish (pollock, bass and pout) around the wreck – dolphin-attracting fish.

Dave’s dive down to the wreck took five minutes; he then spent five minutes fixing the listening device to the wreck.  He then had time for nine minutes of exploring the wreck and then the ascent started; stopping at 31m, 24m, 19m, 12m, nine metres, six metres and four metres on the way up – which took 40 minutes.  So it’s 20 minutes going down and being down and 40 minutes coming up slowly to avoid the risk of the bends.

In a month’s time, Dave will be going down again to retrieve the listening device and then Tom and others will find out whether the wreck has been visited by cute dolphins  looking for fish.

Well, I say they are cute, but we saw none of them whilst we were out in Lyme Bay last week so I am taking that on trust.  In fact, I have a slight grudge against white-beaked dolphins for not showing up, but I’ll get over it.  At least the birds showed up – storm petrels, Manx shearwaters, a few guillemots and kittiwakes, fulmars and several great skuas.

I like great skuas – they are thugs but they don’t pretend to be anything else.  Two thirds of the world’s great skuas nest in the UK – but all of them far from Lyme Bay – on Shetland, Orkney and a few other locations in north Scotland.  They steal their food from other seabirds – great skuas are tough enough to take on gannets, large gulls and fulmars.

I talked to Skipper Ian and he seemed pretty used to making a few quid from chartering his boat to divers and dolphin-watchers and other boats specialise in sea anglers.  There’s enough biodiversity out there for the local boatmen to be making money out of it – just imagine what would happen if the area recovered and became much richer in seabirds and sea mammals.

Dave said that the sea anglers would see great benefits from the banning of bottom-trawling and that divers might see some increases in marine life too.

Tom was feeling bad about not delivering dolphins for me but it was a great day out and a glimpse into a different world from that of cream teas, fish and chips, Cerne Abbas giant,  chalk grassland butterflies, heathland reptiles and thatched cottages that would occupy the rest of the holiday.  And I’ll forgive the white-beaked dolphins eventually.  I wonder whether Reggie Perrin saw them.

To support MARINElife visit their website and see what good work they do and/or donate through mydonate or theBigGive.