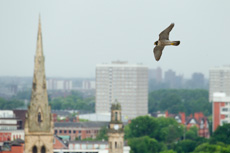 I see peregrines quite often these days, but it’s usually in the middle of London (like this image is of one in the middle of Manchester) rather than in the uplands where I would only have expected to see them in my youth.  This is good – I’m glad they have become commoner and more widespread during my lifetime.

But the shocking level of persecution on birds of prey associated with grouse moors is again revealed in a paper published today by the RSPB and the Northern England Raptor Forum.

Using data on peregrine nesting success collected over almost the last three decades, and satellite images from Google earth to identify where the moorland had been burned for grouse shooting, the researchers showed that breeding success of peregrines attempting to nest on grouse moors was only half that of those nesting on other habitats.

Dr Arjun Amar, of the Percy FitzPatrick Institute for Ornithology – formerly an RSPB scientist and also formerly a scientist at the Game and Wildlife Conservation Trust – is the paper’s lead author. He said: “I was shocked at just how low the bird’s breeding output was on grouse moors; they were significantly less likely to lay eggs or fledge young.” He added: “The few birds that did lay eggs or fledge young on grouse moors did just as well as those breeding off grouse moors, which suggests that a shortage of food supplies can be ruled out of the equation. The only logical explanation for these differences is that persecution is rife on many driven grouse moors.”.

Paul Irving, chair of the Northern England Raptor Forum, said: “To people who visit and live in the uplands of northern England, the peregrine should be a familiar bird in an iconic landscape. However, the guilty few deny the pleasure of many.” He added: “Now it’s up to the Government and the Police to turn fine words into action. So far, there has been little real progress in tackling bird of prey crime and this needs to change urgently to help species like the peregrine.”.

Birdwatch magazine is asking its readers to tell it what they think about the conflict between grouse shooting and hen harriers, this news on peregrines is just grist to the mill.