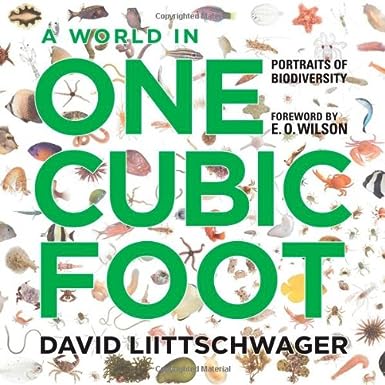 This book is quite different and very interesting.

It was put together by recording, in six different habitats, for a 24-hour period in each, the species that passed through a metal frame of 1-foot dimension.  Then Liittschwager photographed a whole range of species that had occurred within that metal frame in that time-frame.  It’s a bit of a gimmick but it’s quite an interesting idea.

The six habitats were: under the San Francisco Golden Gate Bridge; Costa Rican cloud forest; some woodland in Central Park, New York; a coral reef in French Polynesia; fynbos in South Africa and the duck river in Tennessee.  A varied range of sites which provides a lot of varied subjects for the clear-sighted camera.

This is a celebration of biodiversity on this planet – the only planet on which we know that there is any biodiversity!

And it’s mainly a celebration of the little things – crustaceans and insects.  I particularly liked the skeleton shrimp that lives under the Golden Gate Bridge.

The photographs are all crystal clear portraits of the organisms themselves with no background or context.  They are beautiful and although i have had this book for quite a while and not got around to reviewing it until now, that doesn’t mean that I haven’t often picked up the book to look at the beauties it showcases.

And lest you think it is just a picture book  – the texts for each habitat (written by experts) and the Foreword by the great EO Wilson are well worth reading too.  How many organisms pass through a cubic foot of water in San Francisco Bay every day – a lot (for a more accurate answer see page 22)!

A World in One Cubic Foot: Portraits of Biodiversity by David Liittschwager (University of Chicago Press) is available on Amazon as is Mark Avery’s book Fighting for Birds.

This blog is going to feature book reviews, mostly of newly published books, for the next few weeks.

1 Reply to “Sunday Book Review – A World in One Cubic Foot: Portraits of Biodiversity by David Liittschwager”