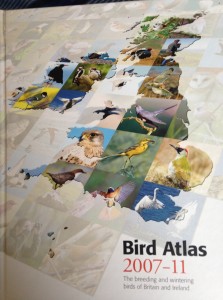 I’ve seen Andy Clements quoted as saying that this is the ‘most important British and Irish bird book for two decades‘ and once or twice thought – well, we’ll be the judge of that!  And you must judge for yourself, but I would find it difficult to argue. And not only is this book important, but unlike many important things (tax returns, getting your car serviced, cleaning your teeth) it is also interesting. More than interesting – it’s fascinating.

Over the next few days (Monday-Friday) I’m going to delve into what the Atlas tells us and what it means for conservation action in future, but in this blog I am reviewing The Atlas as a book which you might want to read and/or buy.  OK, the short version is ‘Buy it! Read it!’.

It’s a big book with 718 big pages.  As you’d expect, there are lots of maps. There are also lots of words – not just the species accounts which you might expect to see in a book like this but also six excellent introductory chapters that set the scene, remind us of the strengths and weaknesses of Atlas data and spell out the whats, whens and wherefores of this mammoth project.

There are many wonderful photographs (and hardly any dull ones) and David Daly’s artwork is superb (in my opinion).

The Atlas, as a book, is a a delight to look at.  It looks clean and clear – the layout is very well done in almost every case.

Not only do we get lots of maps, we get lots of species too. Were you expecting to see distribution maps of Muscovy Duck, American Wigeon, Ring-billed Gull, Eurasian Eagle Owl and Yellow-browed Warbler – all are here?

Once or twice I wondered whether I needed all these species and all these maps – whether there might be a little bit of overkill. But it would have been very difficult to decide what to leave out.

I have one gripe about the maps of relative abundance change – which I find the most interesting of all the maps (at least, I have spent more time looking at them than I have the other maps) – and that is that increases in abundance are in red and decreases are in green. I suppose it doesn’t matter but these seemed the ‘wrong way round’ to me and I had to keep reciting to myself, not out loud though, ‘green bad; red good’.  I feel less irritated by it now I’ve mentioned it.

…and there are so many more.

I wondered whether there would be enough in this Atlas to surprise me.  As a reader and purchaser of previous Atlases I remember sitting down and thinking, often, ‘Wow!’ and ‘I wouldn’t have guessed that!’.  These days, we know an awful lot about our birds.  We have a plethora of books and much up-to-date information at our finger tips.  Because the breeding distribution data come from 2008-11 it is already, in a way, out of date.  The Ruddy Duck’s status has changed a lot since 2008 and the Turtle Dove is half way to the ground in its fall off a cliff.  But that is where the maps of change in relative abundance are so fascinating – for almost the first time we can see the patterns of change in some detail, so even if the distribution maps and distribution change maps look much as we might have expected, there is often a map of change in abundance to add something to the story which we might not have known before.

The authors of this Atlas (Dawn Balmer, Simon Gillings, Brian Caffrey, Bob Swann, Ian Downie and Rob Fuller), and the wider BTO, BWI and SOC team,  have done a fantastic job in producing this work.  We, the observers listed in small type on pages 652-665 (and, yes, I looked for, and found, my name in the list) collected the data but that was the easy and fun part.  This work of synthesis and explanation needed much more than simply sticking lots of dots on maps.  The UK and Ireland are indeed fortunate, although not lucky (because luck had nothing to do with it) in having the organisations and the individuals to carry off such a remarkable feat of data collection and analysis.  Botanists, entomologists, mammalogists – read it and weep!

And this Atlas could not have been so interesting were it not for the Atlases that went before.  The change maps depend on the work of many observers now deceased or now with grey hairs, as well as the efforts of Tim Sharrock, Peter Lack, David Gibbons,  James Reid and Bob Chapman.  Their work is embedded in this book, and supports it greatly – they provided excellent foundations.

Almost all of the species accounts are sponsored by individuals or organisations.  Nicholas Watts and Vine House Farm, providers of bird seed, nabbed the Corn Bunting, the last bird in the book. The other buntings are sponsored, appropriately enough in some cases, as follows: Snow Bunting (a Scottish species which we can expect to be affected by climate change – Scottish Environment Protection Agency); Lapland Bunting (an attractive species – Wincey Willis); Yellowhammer (a declining species – Songbird Survival); Cirl Bunting (a success story – RSPB); Reed Bunting (Lesley J. Nickell).  Everyone who sponsored a species has helped the Atlas into existence too.

I confidently predicted that the previous breeding Atlas would be the last breeding Atlas but it was the penultimate breeding Atlas.  It won’t be right to produce another book like this in 15-20 years time.  The BTO and partners should start now to think how to adapt Birdtrack to become the scheme that can produce the type of information contained in this wonderful volume every year.

Buy it! Read it! And think about what it shows of the ornithological reality of the UK and Ireland, and also what it says about the healthy state of collaboration between amateur and professional ornithology in these isles.