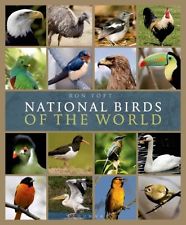 David Lindo is exhorting us all to vote for a National Bird to see whether the Robin remains our top choice so maybe it is worth having a look at what other nations have chosen.

Which country has chosen these species as their national birds (answers at end of this post):  Andean Condor, Goldcrest, (Eurasian) Blackbird, Dipper and Rufous Hornero?

Here are some of the easier species to allocate to their territories: Venezuela Troupial, St Vincent Amazon, St Lucia Amazon, Grenada Dove, Puerto Rican Spindalis and Taiwan Blue Magpie. And then there is the Kiwi for New Zealand and the Kagu for New Caledonia.  Some countries go for the species that only they can choose – but would we really want the Scottish Crossbill. a species difficult to see (especially if you live in Cornwall) and difficult to identify – as our national bird? And it would have been ‘all change!’ had Scotland voted ‘Yes’ last week.

US states all have gone through the same process and there is a block of six western states that all chose the Western Meadowlark, a group of five southern states that chose the (Northern!) Mockingbird and a range of six northern states who have the Cardinal.

Where territories are choosing a bird to represent them they almost always choose a familiar bird that many will have seen (and probably liked) or a ‘special’ bird which has relevance to their part of the world even if it isn’t that well known by the population, or even if it is extinct (Dodo, Mauritious). However, South Dakota have the Pheasant (a game bird introduced for shooting purposes from another continent) and the French chose the cockerel (or Indian Jungle Fowl),  a tasty domesticated bird most-oft encountered on a menu).

This book was much more interesting than I expected! It got me thinking about why we like some birds, and some wildlife, more than others.

The book is well-illustrated and has a pleasing mixture of information about the birds and the places – but it tells us, between the lines, quite a lot about ourselves.

National Birds of the World by Ron Toft is published by Bloomsbury, as is Mark Avery’s A Message from Martha .