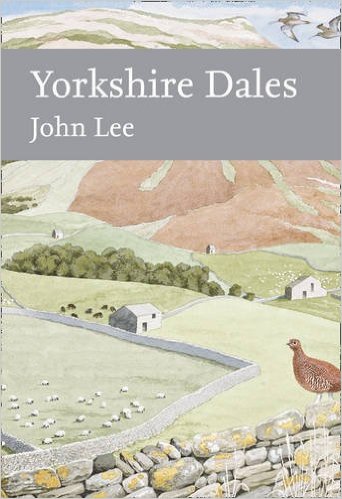 Sometimes I have a book for a while and I keep putting it down and the voice in my head says ‘I’ll settle down and read it a bit later’ and when that happens it’s a pretty good bet that I’m not going to be gripped by the book.  This was one of those books – which is not to say that it is in anyway a bad book, and you might love it, but it just didn’t engage me intellectually or emotionally.

I know that New Naturalists have an almost mythic reputation, but to be honest, they are a mixed bag. And I wonder whether, nothing to do with the authors, the standards are slipping a bit.  The credit for the cover, to Robert Gillmor,  is in the tiniest possible font – hardly a good way to treat your artist. And then the photographs in the body of the book work badly on the whole. Most of the photographic illustration of animals and plants are pretty good (some are not) but those intended to show what particular habitats look like or to show off the natural beauty of this National Park are far, far too small and some are badly chosen and many are reproduced badly. Rarely will the Dales have looked so dull.  For a paperback costing £35 a much higher standard is needed.

But when shrinking from some of the photographs, one turns to the words. The chapters deal with the history of the place, its habitats and arguably its star species, the Lady’s Slipper Orchid. I enjoyed the chapter about the star orchid quite a lot although perhaps the author might not have started the chapter with the truthful comment, but rather a turn-off, that this is a widespread and unthreatened species over much of Europe.  It needs to be said but maybe not in the first sentence to win us over.

But the story of the ups and downs of the efforts, generally now successful, to conserve this species in this place – and of the dedicated people involved – is interesting and well-told.  I now know much more about this plant and feel closer to it and want the National Park to work even better for it.  I thought this chapter was the high point of the book.

As we visited various habitats and heard about their species I realised why the book was not really gripping me. It is essentially descriptive and documentary and not analytical. There is little comment on whether various management practices are good or bad, or why they happen, but just that they are there. I did not get a good feeling for how sheep farming in the Dales works, and it is a most potent driver of impacts on all the wildlife, and indeed all views and landscapes, of this National Park. Should we have more or fewer sheep? And what impact would that have? And how might that happen?  Whereas I was introduced to the details of the star orchid, I was not taken on an exploration of the major land uses so that I could understand the whole landscape.

And of course grouse moor management is a common land use in these parts too. Of course it is mentioned extensively but it is not analysed as a force in the landscape.  It’s all very descriptive in a non-judgemental way. Red Grouse numbers are ‘optimised’ (not, in my opinion, the correct word) and there is such a thing as a well-managed moor (although that isn’t defined).  ‘Historically’ gamekeepers shot predators such as Buzzards, Hen Harriers, Peregrines and Short-eared Owls apparently, and this still occurs as evidenced by a Hen Harrier being found dead on a Dales moor in 2012. Indeed, that was Bowland Betty, but the impact of such wildlife crime on the wildlife of a National Park is not explored here. It’s as though the occasional killing of protected wildlife is just one of those things. There is no suggestions that the Dales might be a rather different place without all that grouse shooting and pheasant shooting.  There is no statement that the area is devoid of many species of birds of prey which should live here – and that this is a National Park?!

But lest you think I have an obsession with grouse shooting, perish the thought, this approach was applied to all other habitats too.  We are told things, which I’m sure are true, but not led into wondering what might the Dales be like if things were different – which is one way of understanding why they are like they are today.

The book ends with a rather limp look into the future – it will be different apparently. But this chapter, perhaps by accident, provides a fascinating insight into the corporate-pc-speak of the National Park authority by reproducing some of the aims of the National Park. It will, by 2040, apparently, be the home to the finest variety of wildlife in England. Really? Really? How is that going to happen, I wonder?  Which year will the Golden Eagles begin to breed? Which year will see Peregrine Falcons have even normal breeding success?

But it seems that this ‘finest variety’ will be achieved through supporting and helping land owners – this phrase is used five times but when they aren’t being ‘supported’ they are being ‘helped’ instead (twice) or ‘worked with’ (twice more).  Those landowners with their optimised grouse moors will be gagging to stop the wildlife crime in this National Park I’m sure.  I wonder whether landowners had a complete grip on the National Park authority when that guff was written, and whether they still do.  This was an insight into one of our National Parks for which I thank the author most deeply, although he doesn’t find it worthy of comment.

Of course we need to work with landowners, if only to check that all the public money that goes to them is actually delivering some of the aims of the National Park, but a National Park whose aims are so written with reference to the land owners rather than restoring biodiversity, is living in the past, and one wonders whether it has enough freedom of thought to make much of a difference for we the public who pay its bills.

If you are visiting the Yorkshire Dales then take a look at this book. To enjoy its fabulous landscapes (in places) you’ll have to visit as they aren’t done justice in this book’s photographs. If you want to see the Lady’s Slipper Orchid then you will find its dedicated chapter most interesting and useful.  But each time you pass a National Park sign then do wonder what is the point of English National Parks for you are paying for most of what happens in them through your financing of the National Park Authority, the agricultural payments to landowners and your tourist spend.

Yorkshire Dales by John Lee is published by William Collins.