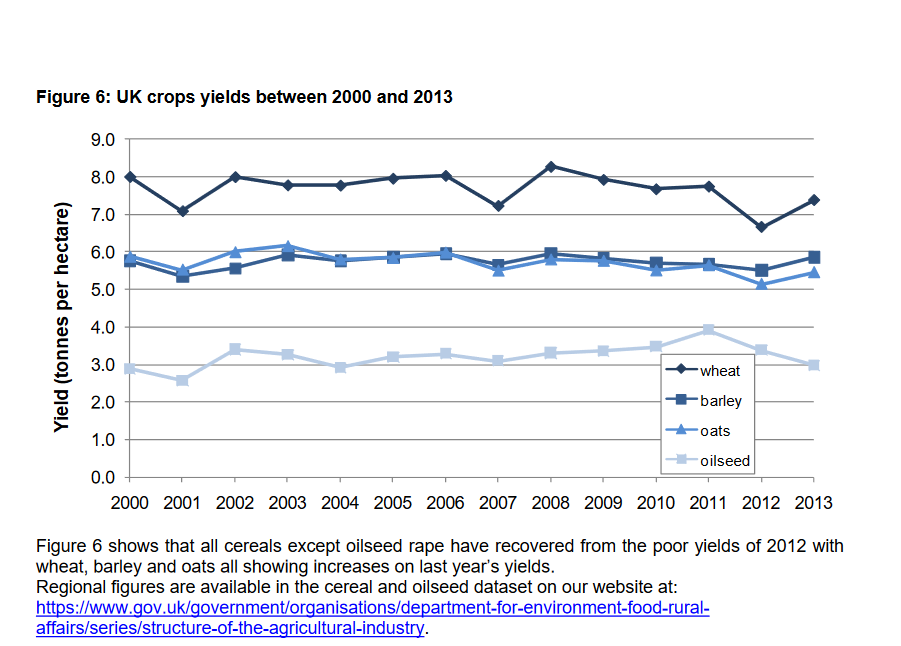 I thought I’d go and look at the OSR yield data myself after listening to the spat between the wonderful Matt Shardlow of Buglife and Graeme Taylor, the Public Affairs Director of the European Crop Protection Association yesterday, and then again the umpiring of the spat by a bloke from the BBC’s More Or Less programme this morning (at the end of the programme).

Here are the UK yields (tonne/hectare) of oil seed rape running up to and including 2013, and those of cereal crops too (Defra figures: see here, Figure 6).  After 2013, the use of neonicotinoids was banned by the good old EU despite the UK’s Opatz having another view.

We can see that for the last 12 years (back to 2002) UK OSR yields have fluctuated between 3 and 4 tonnes/ha with the average being below 3.5t/ha (I’m just reading off the graph, nothing more sophisticated than that).

So, if a neonicotinoid ban affected OSR yields we would expect some low values in 2014, 2015 and 2016.  Or would we? Farmers could use neonics up until 1 December 2013 and so they would have been used on autumn sown OSR (the vast majority of the area), although not on spring-sown OSR, which would have been harvested in 2014. So 2104 was a mixed year – though closer to a ‘neonic use’ year than a ‘neonic ban’ year.

So the mixed year, 2014, was quite a good year for yield (despite some crops not benefitting from neonic use) and according to ADAS data quoted by Pesticides Action Network UK, spring sown OSR did pretty well without neonics in 2014.

2015, no neonics in use, was one of the best harvests in the past decade and a half, whereas 2016 was a poor year. It would be hard on this basis to argue that the neonic ban has had a major impact on OSR yields even though such an impact was predicted by the likes of Matt Ridley and Peter Kendall.  So Peter and the not-so-talented Viscount Ridley (who has previous, see here, here) were wrong – really very wrong. One might say almost completely wrong.  But they were predicting and we all know that is very difficult – it’s much easier to explain things after they happened than to say what will happen.

The man from the ECPA, the pesticides industry representative, was talking about a report which looks across the whole of the EU but which doesn’t seem to use actual yields but uses notional yield losses. This is very odd and a bit perverse when the actual yields are available – perhaps not for all EU countries? The data used by the ECPA report for the UK are not the available DEFRA figures for the UK as a whole (see above and references) but according to the Executive Summary of the ECPA report (page vii – go look!) this study: Alves, L.; Wynn, S.; Stopps, J. (2016): Cabbage stem flea beetle live incidence and severity monitoring. Project report no. 551. Wolverhampton: ADAS UK Ltd, which might be a wonderful study but isn’t the real information on UK OSR yields. So, Alves et al suggested that lots of damage occurred to OSR crops in 2015 but Defra figures demonstrate that this was a near-record, record-high not record-low, year for OSR yields.

And looking at the UK data, I think Matt Shardlow was right to be very firm on the point that yields have not slumped since neonics were banned in the UK. They haven’t! There has been one very good year and one quite bad year and the average yields over those two years are not lower than the average over recent preceding years.

The man from BBC More or Less didn’t do an adequate job for Farming Today. First, he seems to think that cereal yields are a guide to what might affect OSR yields and over the last 15 years or so this doesn’t look particularly true. Second, understandably perhaps, he didn’t realise that he should have counted 2014 as a neonic year (hybrid, but more neonic than not neonic) which favoured Matt’s argument (which didn’t actually need any help) and he didn’t look at any data before 2013 which was just silly of him.

Farming Today should have made a much better effort to look at the data properly and then ought to have said that Matt Shardlow should be listened to rather more than the man from the industry.

But I stand to be corrected. I’ve shown you my workings – tell me where it’s wrong.

Postscript: I certainly don’t see the industry giving Matt a hard time on social media – is that because they think he was right, or because they don’t really care about the data? Only they can say.