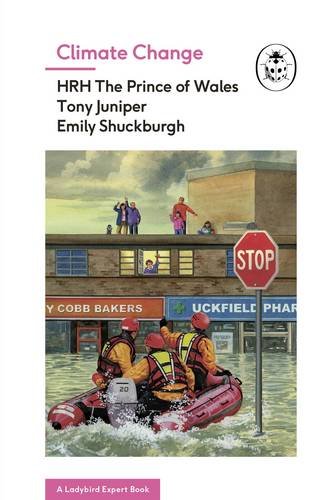 It’s a while since I bought a Ladybird book – but I still have a lot of the original series dotted around the house.

This book, published today, is one of the ‘Expert’ series and the three authors can rightly be classed as such (but even if they weren’t, this book has been peer-reviewed by an impressive panel of scientists).  It is a clear, unstuffy treatment of a very important subject.

We start with the facts about warming of the Earth and where the evidence comes from. What might be, and are already, the impacts on our lives now and on future generations?  Wildlife gets appropriate mentions as an indicator of climate change and also a victim. The book then moves on to solutions – those we can each make individually and those we as communities, nations and as a species need to make together.

This is a Ladybird book – it’s not overloaded with words. If you have a long commute into work you could polish it off on one day with no problem at all.  It’s a slim volume, nicely illustrated and written with admirable clarity.

The illustrations by Ruth Palmer deserve a special mention – they are attractive and very evocative of those of the original Ladybird books.

Judging by its Amazon ranking, this book is flying off the shelves and that must be largely due to the Prince Charles/Ladybird Book combination as few climate change tomes become best sellers.  Royalties from sales go to the Prince of Wales’s Charitable Foundation.

I wonder, would Prince Charles be able to put his name to such a book at some future time when he might be our king? Or would the subject be regarded as too political?  This was a very worthwhile project and the first author’s celebrity status will get the messages to a wider audience than would otherwise be the case.

Theresa May should give a signed copy of this book to President Trump tomorrow.

Climate Change by HRH The Prince of Wales, Tony Juniper and Emily Shuckburgh is published by Michael Joseph.