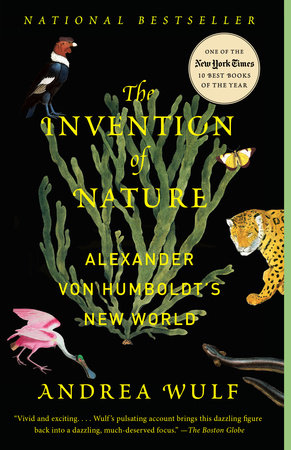 One of the joys of reviewing books is that you end up reading titles that would otherwise pass you by. Of course, it doesn’t always work out well, but I had high hopes for this one having read about all the awards and commendations it has received.

Before reading this book, I’d heard the name Humboldt only in the context of ocean currents and penguins. I had no idea he played such a pivotal role in the development of the natural sciences, or that he has had more things named after him than anyone else who has ever lived.

This book tells the story of his eventful life starting with his privileged upbringing in Prussia. His first job in mining is dull and unfulfilling but his fascination with nature is a constant influence and he longs to travel to some of the world’s more remote and pristine locations. Eventually, in 1799, he gets his chance and embarks on an epic trip around Spanish-controlled central and South America. He travels vast distances, enduring impossible conditions at times, but observing and recording meticulously wherever he goes. Later in life he completes another monumental trip across Russia, all the way to the border with China and Mongolia (popping across to visit each of them without permission from the Tsar). When not travelling he remains frenetically active, hopping between homes in Paris and Berlin, writing his influential books, working as an advisor to the King of Prussia and exchanging views with a never-ending stream of visitors and correspondents. His enthusiasm is boundless and he is prone to talking non-stop for lengthy periods – the mild-mannered Darwin is left frustrated and bemused when he is unable to interject a single word into the conversation.

Humboldt lived at a time when the world’s thinkers tended to range widely across different subjects, and it is only towards the end of his life that science starts to become more rigidly compartmentalised. He is interested in everything around him. He studies plant distribution in relation to climate and soil type, and he makes countless measurements of height, temperature, magnetism, and even the colour of the sky. On his travels, he fills trunks with vast collections of pressed plants, animals and rock samples. He is also interested in people and is a vocal opponent of slavery and a campaigner for social justice. He bemoans the recent felling of forests in South America and warns of the resulting impacts on soils, climate and local farmers – one wonders what on earth would he think now?

His books effectively conveyed the full beauty of nature and its importance for human well-being, at the same time as presenting new insights into how it all worked. He essentially pioneered the discipline of ecology, describing how species were closely interconnected and how they responded to changes in their environment. They were perhaps the first books that would fit the modern description of ‘popular science’ and they influenced poets, artists, politicians, philosophers and the broader population as well as fellow scientists.

The author tells the story fantastically well and, as a historian, is well-qualified to set Humboldt’s life in context with the turbulent history of the period. Humboldt becomes the central figure in a wide-ranging narrative that encompasses revolutions in Europe and South America, the founding and expansion of the United States (he meets the President several times) and increasing industrialisation in Europe. It is all superbly-well researched but always lively and readable.

It is only at the end of the book that we hear why Humboldt doesn’t get the full credit he deserves. For a start, he is German and following the First World War that could lose you points in Britain and the United States. More importantly, many of his ideas about nature are now so taken for granted that it is hard to see how fresh and ground-breaking they were at the time.

His greatest achievement seen from a modern perspective is perhaps not in the ideas he developed per se, but the way they inspired and influenced the work of others – people like Darwin, Thoreau, Ernst Haeckel and John Muir, some of whom met him and all of whom avidly devoured his books. They are treated to mini-biographies of their own in one of the most interesting sections of the book. It is their legacies we tend to recognise today rather than Humboldt’s. Whether or not that’s fair is open to question and you’ll need to read this thoroughly entertaining book to make up your own mind.

The Invention of Nature: The adventures of Alexander Von Humboldt – the lost hero of science by Andrea Wulf is published by John Murray.