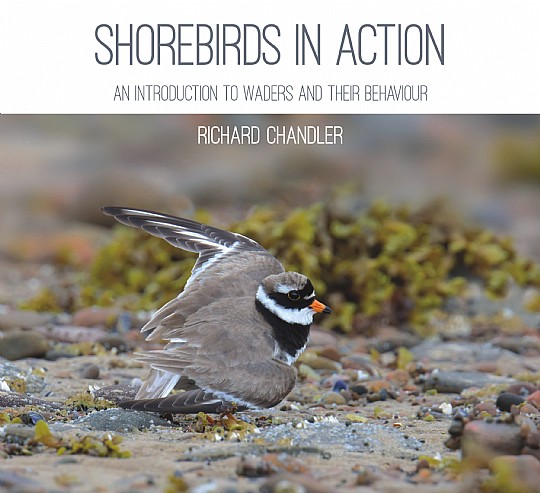 Shorebirds in Action: An introduction to waders and their behaviour, by Richard Chandler

I’m a big fan of books that blend photography and the written word, though they sometimes struggle to reach their full potential. So often, it seems, photos are added to books almost as an afterthought, simply to help break up the text. Or, worse still, bland and uninformative captions are cobbled together for a book showcasing photographs. Shorebirds in Action provides a great example of how it can be done well. Photographs and text take up roughly equal space and great care has been taken to amalgamate the two into a coherent and well-organised volume.

The book focuses on the behaviour of waders and uses carefully-chosen images that illustrate the themes covered in the text. The first and longest chapter deals with taxonomy and relationships. It explains why birds such as jacanas, buttonquails and seedsnipes sneak into the wader club, as well as describing the more typical wader families. Shorter chapters deal with plumage/moult, feeding, breeding behaviour, migration and flocking. The text is readable throughout and there is a helpful, if somewhat eclectic, selection of references at the end of each chapter. The images are mainly excellent and printed to a decent standard, with the best of them given half or even a full page.

Whilst this is not an identification guide, the range of species and plumages described, and the detailed captions, means that it will do your identification skills no harm at all. Photographs of around 180 species are included, representing no fewer than 80% of the world’s waders. In itself, this is no mean feat for a single photographer and the result of many decades of effort in far-flung locations across the globe. It is all the more of an achievement when taking into account the huge diversity of different behaviours that are captured in such detail – this is not a book of standard wader portraits. With one minor cheat, the book could claim to include photographs of waders in all seven continents – the sole Antarctic representative, the Snowy Sheathbill, was actually photographed at the southern tip of Argentina.

This is a book that could certainly be read from cover to cover as a lively and engaging introduction to waders. But it is also well-suited to dipping in and out of and I imagine that’s how experienced birders are likely to approach it. Much like trying not to chew a fruit pastille (if you remember the advert) it’s a book that is virtually impossible to pick up without starting to flick greedily through the pages.

There are a few photographs where the image quality dips slightly and I suspect this involves species photographed many years ago before the digital revolution made things a little easier. It might have been tempting to substitute higher quality, more recent, pictures by other photographers, but that, I think, would have been a mistake. This book represents half a lifetime’s work and dedication to the cause, and, for me, that adds considerably to the story it tells. The book is a real labour of love and one that I would highly recommend to anyone interested in these birds or willing to become so.

Shorebirds in Action: An introduction to waders and their behaviour by Richard Chandler is published by Whittles Publishing