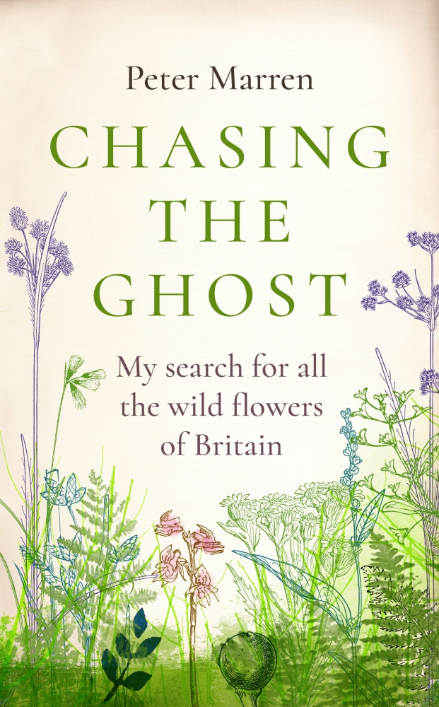 I’m no botanist (have I said that before recently? – yes) but this book, had it existed decades ago, might well have won me over.  Peter Marren writes with such knowledge and affection for plants, and in such a modest and winning manner that few could help wanting to be a plant spotter in this image.

This book documents the search by the author for 50 plants that he has not seen in the UK. Compared with most other quests for a stated range of species in a specified period of time, Marren’s search seems a lot less frenzied, less competitive and more civilised and relaxed than others.  If he hadn’t seen any of the plants then this reader could imagine the author shrugging and saying ‘Oh well, where’s the nearest decent pub?’ or something equally untortured.

The descriptions of the plants are tender, as are many of the plants, and really did make me care, almost against my will, about their commonly somewhat tenuous grip on UK citizenship.  Many are found in single localities, some have been pronounced extinct in the past and have reappeared many years later, others need guarding, some have needed reintroduction.  But Marren makes the case, through his enthusiasm rather than in any didactic manner, that each of these small green species, even the ones where you can hardly tell them apart from other common species except by looking at how hairy are their stems, deserves its place in our countryside and our lives even if it is only on one grassy bank, next to one woodland in one locality: we would be worse off if they weren’t encouraged to cling on.

And in this book we meet many people, from nature reserve wardens, to land owners, to amateur but dedicated botanists who are rooting for these plants.

Botanists seem like nice people, at least the ones that Peter Marren knows seem to be.  They appear to be outgoing and collaborative, perhaps they are so delighted when anyone shows an interest in their local speciality that they can’t help but greet visitors with friendship and warmth. I find butterfly enthusiasts are rather the same – when I go looking for butterflies the people I meet are almost always keen to help and point one in the right direction.  I can’t say the same for birders who are a very mixed bunch indeed. There may be a PhD in here somewhere.

I read this book from beginning to end with more enthusiasm than I usually read books. This book got my attention and I wanted to go back to it each time I had to put it down.  I even missed the location on my train journey into London where I always pause and look for Red Kites because I was in Radnorshire looking at the Winter Lily, and then I missed the spot again on my return as I was by then searching for a Pink in Sussex. The same would have happened a few days later except I set my ‘phone alarm so that I stopped reading at more or less the right time and looked up from the Black Cuillin of Skye in July to the skies south of Luton Airport in March (where there were indeed Red Kites).

If you already have the botany bug then you’ll want to read this book, and to own it so that you can dip into it in future years, but even for the confirmed non-botanist like myself, this is a very good read and one which makes me slightly uneasy about how much I have been missing by looking up rather than down and how blinkered is my view of the natural world.  But the author in teaching me this was very kind and gentle.

There are some cracking books published this year, and I have a pile of them to read and review for you, but I am pretty sure that Peter Marren’s latest work will be in the shortlist of this blog’s books of the year once December approaches.

Chasing the Ghost: my search for all the wild flowers of Britain by Peter Marren is published by Square Peg.