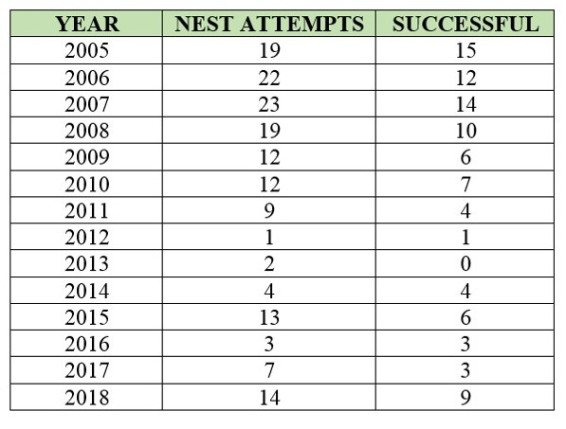 This table was produced by Raptor Persecution UK and it is a valuable resource because it’s quite difficult to find these figures all in one place anywhere else.  I assume it is correct – RPUK usually are – and it looks right to me, but I haven’t checked it (because it is a surprising amount of work).

Obviously, not all nests are successful – and not all nests would be successful even if all gamekeepers were saints and stuck rigidly to the law of the land. Hen Harriers fail through all sorts of reasons and we will never have a year when all the eggs that are laid actually hatch and all the chicks that hatch actually fledge.

That centre column is the one that could conceivably reach 300+ if illegal persecution were removed from the scene (I’d be a bit surprised if it did, but the habitat is there for them) whereas the right hand column will always be a much lower number.

It’s a relatively small thing, but it would make me happy if we did that.

That’s where I was going to end this post but I got slightly engrossed in the matter and so have attempted to come up with my own table which goes back a bit further and includes the number of chicks fledged.  Because there are some small discrepancies between my table and RPUK’s I’ve given the sources for my information.  So I have actually tried to check RPUK’s table – but I’ve no doubt made some errors of my own here.  My point is that it would be good to get this type of thing agreed by all (or almost all) and tabulated somewhere.  I’ll happily take comments and corrections on my version of this table – but you’ll have to give me something to put in the fourth column that states where your estimate is documented, please.

The first few lines of my version of this table come from trying to read off the figures from the graph in the Natural England report from 2008 – A Future for the Hen Harrier in England? It’s surprisingly difficult to read the figures off a graph on a computer screen!