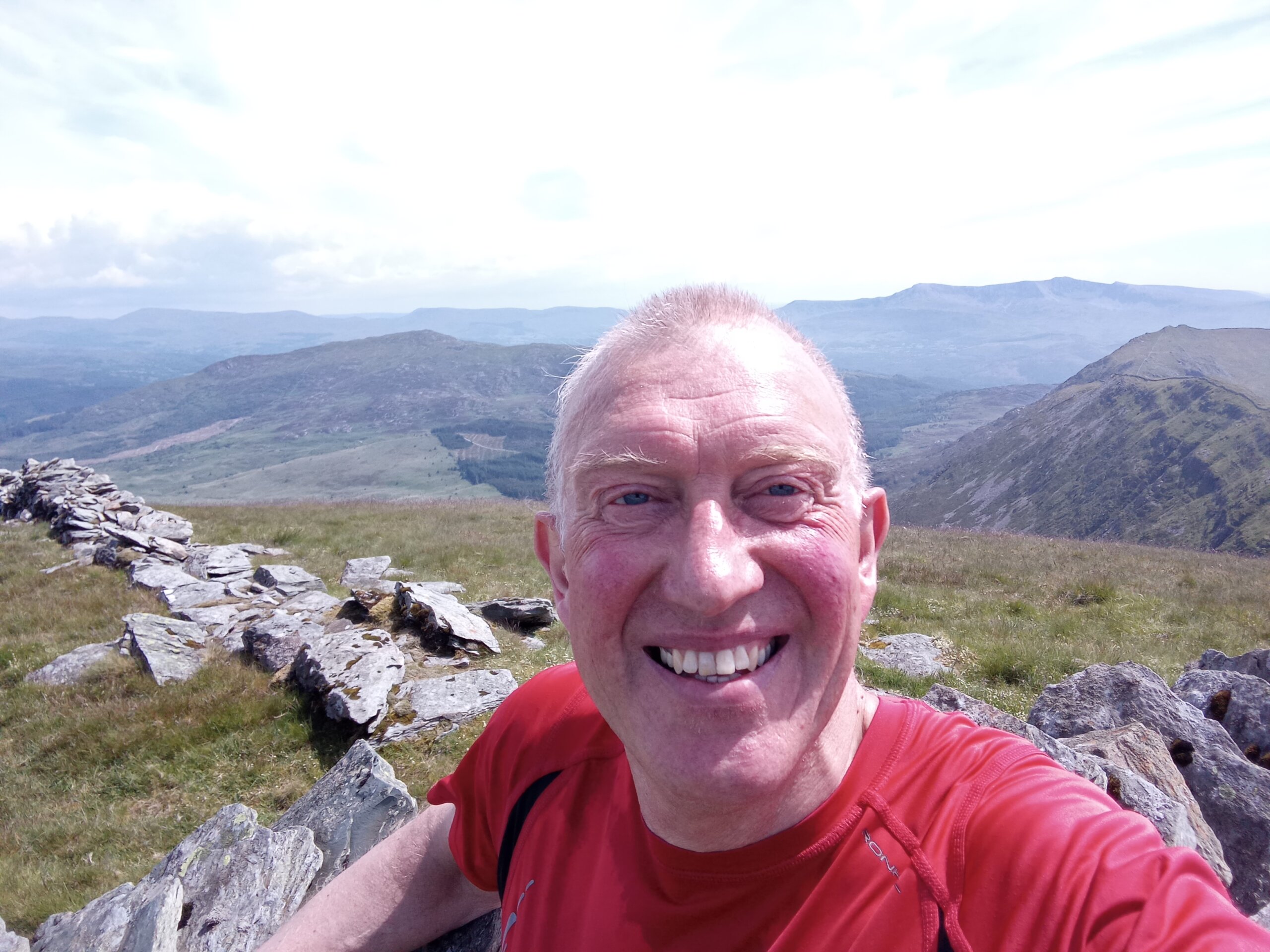 Enforcement of the Burning Ban – a long road to justice

My life has changed a lot over the last couple of years and it now seems normal to chat to a police officer sitting at my kitchen table. He was taking a witness statement from me about harassment from gamekeepers. I explained what I did out on the moors and he said “At least you don’t lock yourself on”. It’s still a tiny minority of people who campaign or protest about what’s happening to our planet but no one can deny we are facing a climate crisis and a biodiversity crisis. The peat uplands of the Pennines are our Amazon Rain Forest, containing millions of tonnes of carbon and it took ten years of legal action from RSPB to force the Government to produce any sort of restriction on burning upland peat. However there’s been a huge amount of lobbying from shooting interests to water down the legislation and that’s resulted in a partial ban where peat depth is over 40cm – the habitat known as Blanket Bog.

The moors around Sheffield where I live are around 50% Blanket Bog. The remaining half are still peat soils, but shallower and are generally described as Dry Heath. The peat soils of all these uplands were created in very wet conditions – that is the only way peat is formed. But now we are left with a very dry habitat with little sign of actual bog. Much work and a lot of money is being spent to re-wet and regenerate deep peat areas so that new peat is created and carbon is locked in (sequestered). However there is no regeneration work on shallower peat and CO2 is lost.

When the Blanket Bog burning ban was introduced, Guy Shrubsole soon discovered that Defra hasn’t published a map that defines deep peat areas, so how can the burning ban be enforced? Is this just another environmental gimmick which sounds good but never results in any action?

The new regulations applied from the start of the burning season on 1st October 2021 and already on 11th October residents of Sheffield saw this huge cloud of smoke drifting into urban areas. 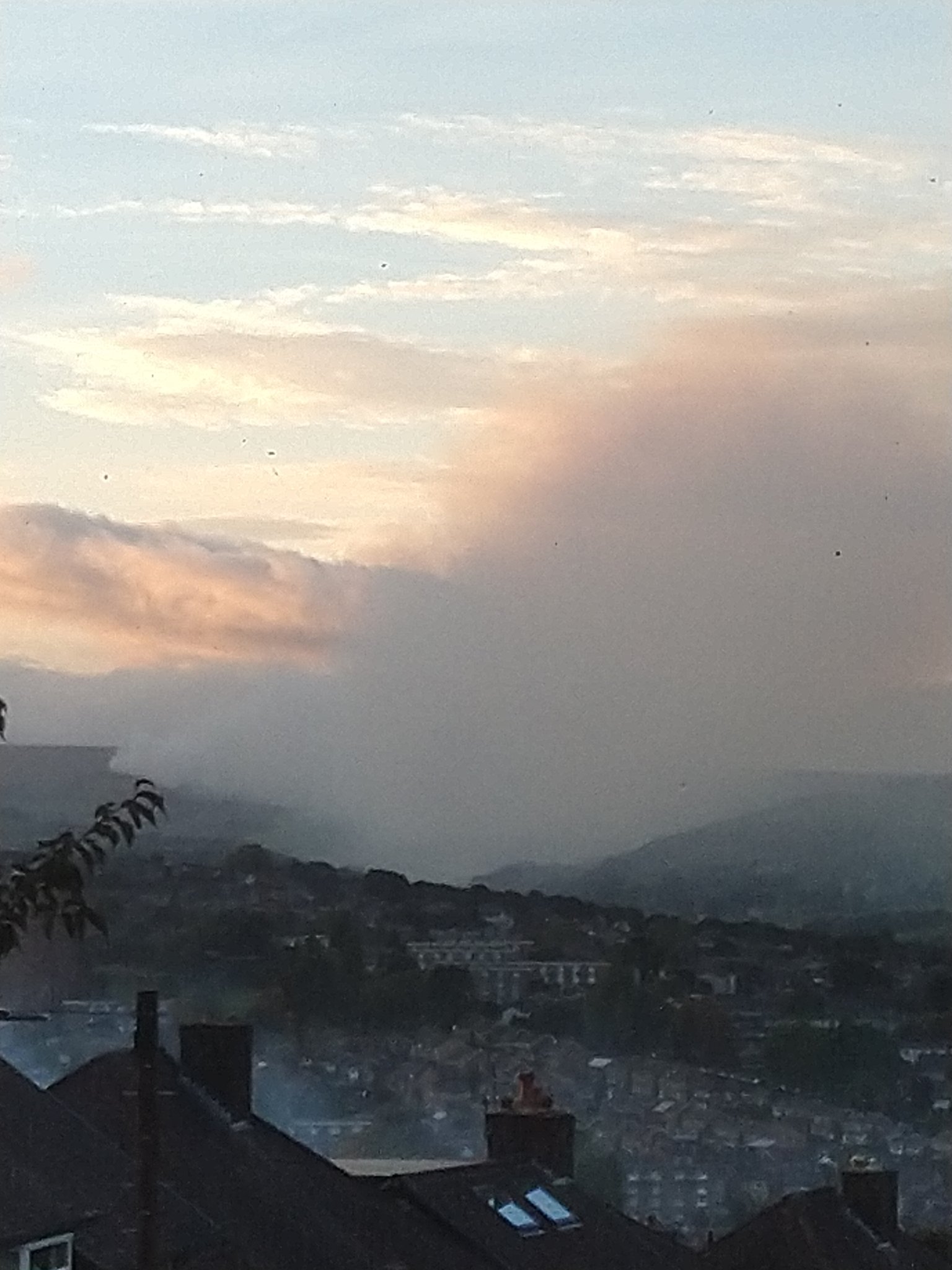 Local MP Olivia Blake posted on social media about the possibility of an out of control burn. Something touched a nerve and on 12th October 2021 Amanda Anderson, Director of the Moorland Association,said:  “The claims that are being made today about alleged breaches of government legislation do not square with the information we have from our membership and Natural England which investigates such matters. Natural England have a set protocol for investigating any problems and our understanding is there are no investigations actively under way…..There is no evidence whatsoever that any legislation has been contravened to date nor evidence that burning is being carried out to anything but best practice standards”.

It took me several visits until I eventually found this burnt area around 500m in length and up to 50m wide. A single photograph cannot convey the devastation here. 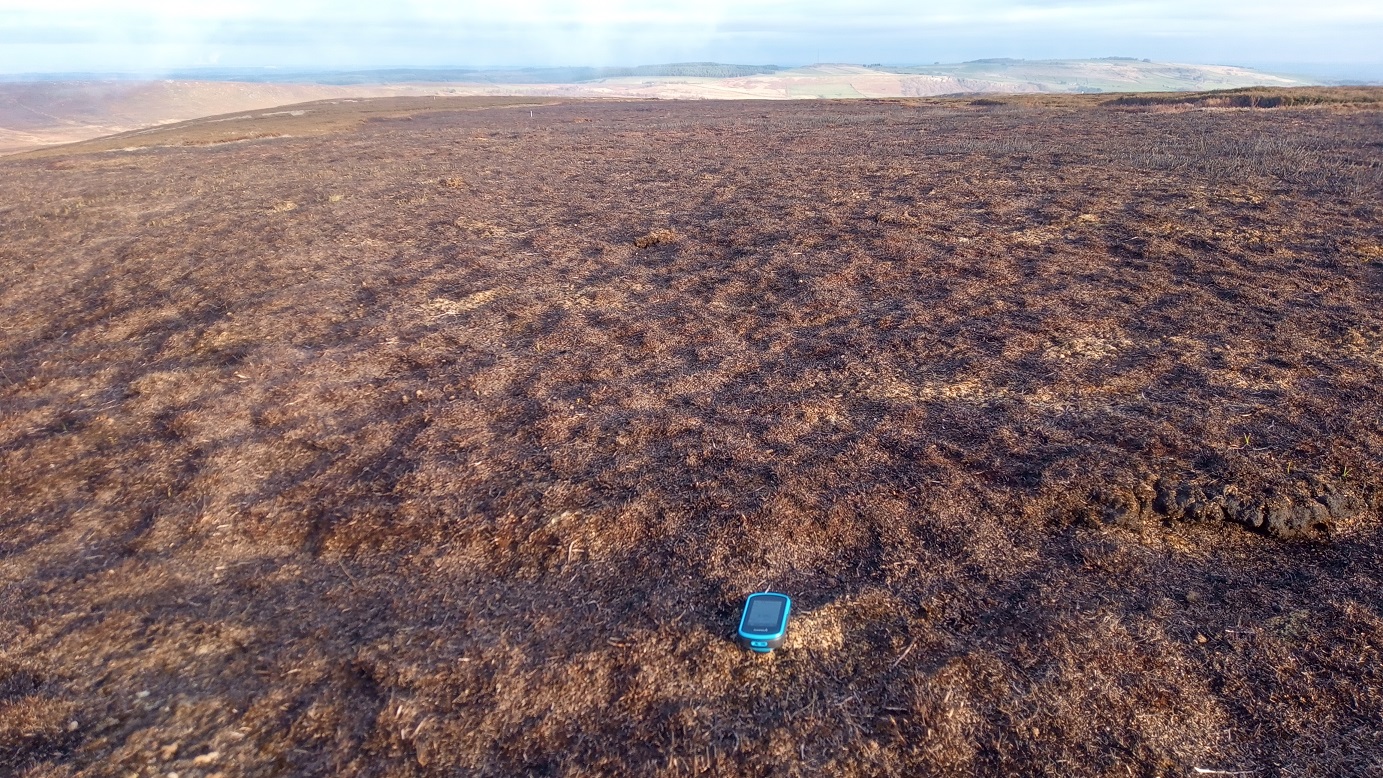 One of the habitat maps, regarded as accurate, defines this area as Blanket Bog. In addition the soil has the spongy, springy feel of deep peat and part of the out of control burn exposed a grid of sphagnum plugs. 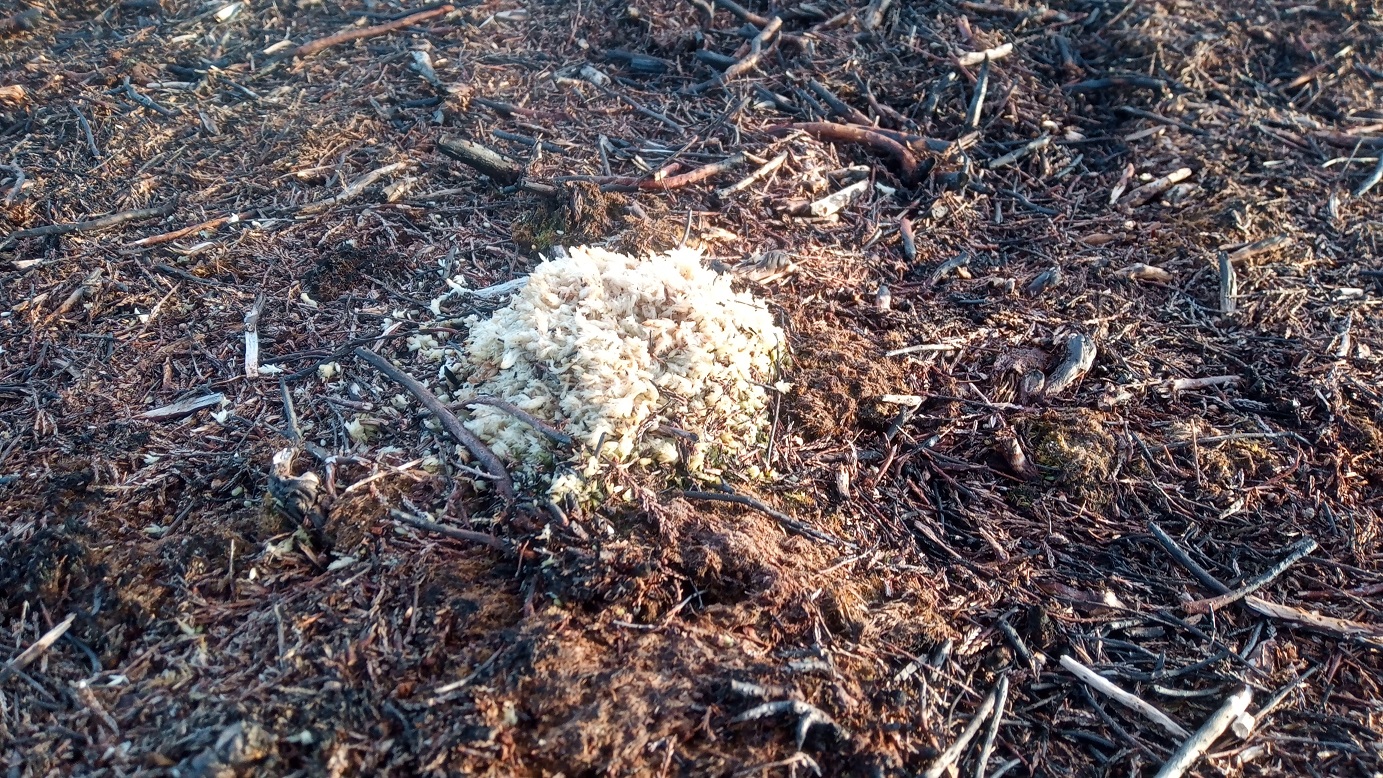 High water content generally protects sphagnum from complete incineration and this type of planting is part of moorland regeneration, which only occurs in Blanket Bog areas. In addition there were 20 or more other individual burns in this area, including this one showing considerable peat depth in a dry water course: 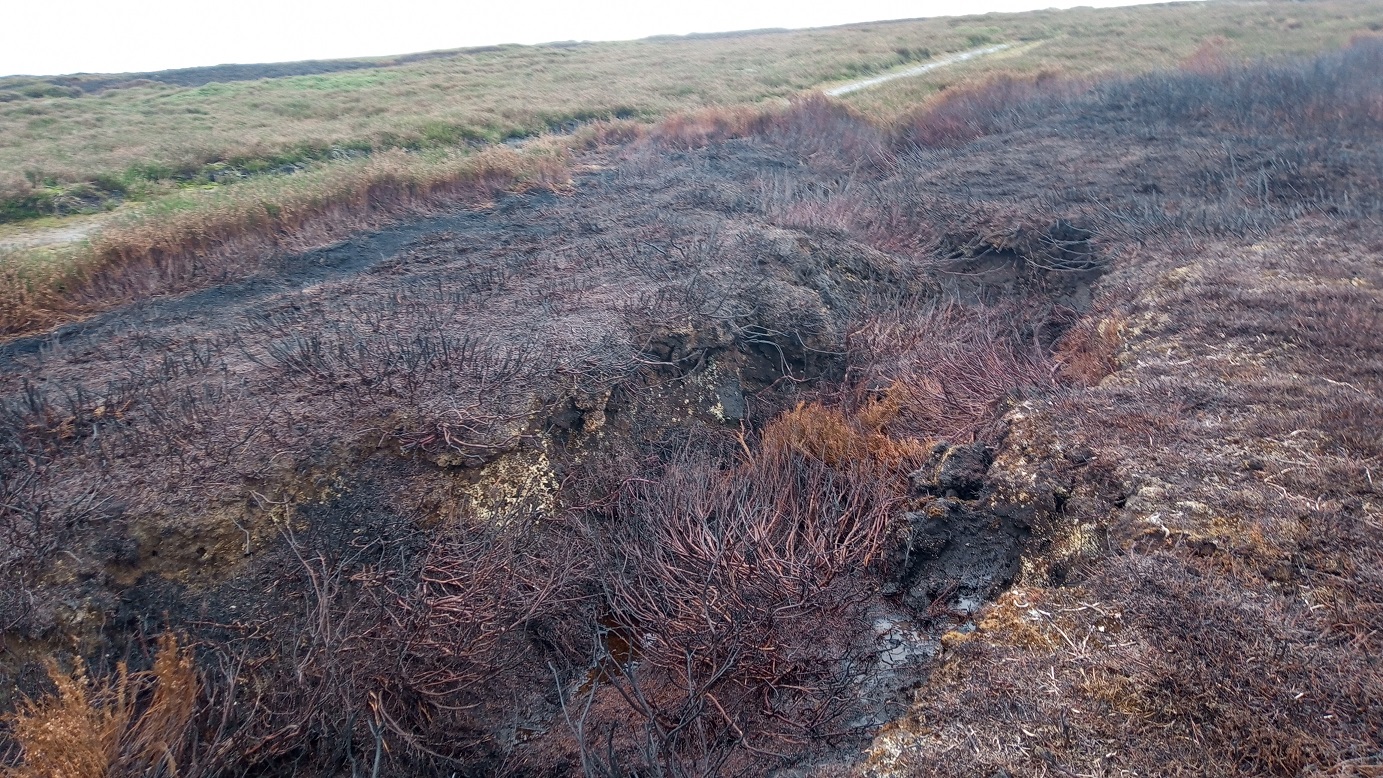 I reported all these burns to Natural England and copied in my MP Olivia Blake. I really did think there was sufficient evidence of illegal burning and it was Natural England’s responsibility to gather the necessary evidence for enforcement action.

Three months later I was still waiting for a response and it was only after a follow up letter from my MP that Natural England replied. NE did make a site visit to assess the burning. The Estate had reported an out of control burn, as required by their management plan, but said the burn started on Dry Heath and then spread to Blanket Bog by accident.

The “best practice” standards claimed by the Moorland Association include cutting a fire break around every proposed burn and adhering to the management plan which states “Burning will only be carried out when conditions allow for quick cool burns. A cool burn is one which removes the dwarf-shrub canopy yet leaves behind a proportion of ‘stick’ and does not cause damage to the moss layer or expose the peat surface. When conditions do not to allow for this, fires will not be started”.

Clearly, out of control burns should never happen and are due to inappropriate conditions or inappropriate management of the burning, in other words gamekeeper incompetence.

I could see that Natural England were gearing up for lightest touch enforcement, only asking for some restoration (vegetation planting) on the out of control burn. Regarding the other burns in this area the message was very clear: The Estate had set out to “Ground Truth” peat depths on their land and had commissioned a peat depth survey which was now being used for management, in particular where burning could take place. It was clearly stated that all the other burning was on Dry Heath (peat depth less than 40cm) and therefore legal.

It took several emails to find out the peat depth survey was not carried out by independent surveyors, but by the head gamekeeper. Natural England has not verified the accuracy of this map but is using the map as part of the official management plan.

So an unverified map produced by Estate staff is being used to determine the legality of any burning on their own land.

I won’t quote the exact words but the response from Natural England said some peat depth measurements would be helpful.

Sixteen measurements were taken on burn sites, all showing peat depths greater than 40cm with a maximum peat depth of more than one metre.

The legislation is clear:

The Heather and Grass etc. Burning (England) Regulations 2021 state: “a person must not burn specified vegetation on a designated site on peat that is of a depth of more than 40 centimetres”

No special licence was issued and the burn sites are all within a designated protected area.

The evidence appears to be unequivocal but I still don’t have any confidence that meaningful Enforcement Action will result.

There is a lot more to this case that really does ring alarm bells. Given the peat depth map now forms part of the management plan, I requested a copy under Freedom of Information. There was considerable reluctance to send the map but it eventually arrived several weeks after the statutory deadline.

The Estate has put Copyright onto the map which restricts usage – basically it cannot be shared. The Freedom of Information Act does allow for this but then there is the whole question of public accountability. This Estate receives huge sums of taxpayers’ money via Stewardship schemes which are part of the EU Common Agricultural Policy, not yet replaced post-Brexit and the EU defined a system called Cross Compliance which is supposed to ensure transparency and accountability. Management of protected sites must ensure that any “Operations Likely to Damage” those sites have specific consent. Heather burning can only take place if it follows the management plan and that is now based on a map which the public cannot share and cannot verify.

The map cannot be verified because it came with a whole set of conditions saying it was unlawful to check peat depths and unlawful to take any photographs on Access Land, which is not what the National Park Authority say.

It’s no surprise to me that Natural England failed to take peat depth measurements during the site visit but that is precisely what is needed to enforce the legislation and it is the responsibility of the Prosecuting Authority to gather evidence. It’s not the responsibility of members of the public to run the risk of legal action from the Estate so that justice can be done.

Also the reluctance to send the peat depth map is now clear. The map does show a large area of deep peat in the location where the burning took place, although it has to be said the map is basically lines drawn freehand in a poor quality pdf file. So it looks like the claims from Natural England and the Estate, that all burning was on Dry Heath, were made on the basis that no one would ever see the map and no one would measure any peat depths.

And finally more burning did occur at the end of March which I filmed from a public road about 1km away. The gamekeepers were setting several fires simultaneously then leaving these burns unattended whilst they set further fires hundreds of metres away. I called the Fire service as one of these fires burnt unattended into woodland. It seems here that every regulation in the management plan was breached – I’ve logged these and asked that Natural England Enforcement take action and also use this to help determine if the October burning was accidental or due to incompetence.

With new found Brexit freedoms, Defra are watering down Cross Compliance penalties, never mind that the whole purpose of the system is to protect the environment and animal welfare. George Monbiot, writing in the Guardian,  does a much better job than I ever could of explaining why Defra puts farmers interests above and beyond anything else. If we want to protect our environment, this is the culture we have to expose and fight against.