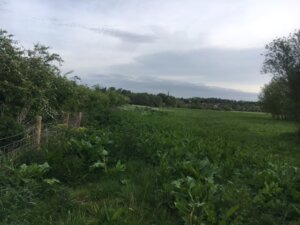 Last weekend I did the second visit to one of my BBS squares. It was later in the allowable time than usual because everything has been later than usual for a while in my life. I wasn’t very optimistic about seeing lots of birds but the aim of the BBS is to record the birds that are there, not to break records of avian abundance. You never know until you are out there with your binoculars. Although, having said that, most of the recording doesn’t need binoculars – it’s either naked eye or naked ear.

As I walked to the start of the survey route through a sleepy Northamptonshire village just before 6am it felt like there weren’t quite as many Starlings as usual and not so many House Sparrows but I hadn’t started recording yet. A man was leaving his house in his pyjamas with his dog and we nodded at each other, perhaps both wondering quite what the other was up to (I assume it was his house).

There were fewer House Sparrows and Starlings than usual on the first two 200m survey sections which are through the village, but overall there were quite a lot of birds. At this stage of the survey I am wondering to myself what the ‘best’ bird of the 10 sections will be. ‘Best’ is ill-defined in my wondering, I’m not expecting, and not too bothered about the rarity of the species I see but more interested in whether they are usual or unusual for this square, but a great view of any bird, or seeing a bird do something interesting or unusual might be the ‘best’ bird. Come on, there has to be a bit of longing attached to walking through the British countryside recording birds.

Section 3 provided a close view of a female Kestrel flying from the tree that often has a Red Kite in it. That Kestrel was the ‘best’ bird for a few moments as it was a close encounter and in the 17 years this site has been surveyed (11 by me) Kestrel has been recorded six times (four by me) so it isn’t that common a sighting.  By contrast, Red Kite has been recorded 14 times and on all of the last 13 survey years and in numbers of 2-4 in all of the last 12 years. You see, Kestrel is a ‘better’ bird than Red Kite in this square.

But Section 3 had more to offer, a Common Tern was flying along the River Nene and I gave that the ‘best’ bird slot, which it held temporarily. As I went through the stile which marks the start of Section 4 I was noting down singing Blackcaps and Whitethroats, when two Tawny Owls  flew away from me silently and perched out of site. Now I reckon that this was an adult and a young one from what I saw, which meant that I could record a single Tawny (young birds don’t count – read the instructions!). Those Tawny Owls immediately displaced Common Tern as ‘best’ bird so far as they were only the second record in the 17 years and the first in my period of tenure – yes, ‘best’ bird can be based on such tenuous criteria.

As I walked along the footpath, parallel, but set back from, the river I was fairly sure that I had got my ‘best’ bird with Tawny Owl. Section 4 did involve trying not to get stung by nettles or snagged by brambles as well as recording a few other birds and then to Section 5 which delivered the ‘best’ bird – a singing Cuckoo. I do hear, and rarely see, Cuckoo on this survey route but this was the ninth out of 17 years that it has been recorded and we all know that Cuckoos are getting rarer in southern England and we know that through the results of the BBS. Lots of people being disappointed not to have heard a Cuckoo recently on their BBS surveys add up to sound evidence to say that Cuckoos have declined in numbers alongside Birdtrack data and the feelings of lots of naturalists and non-naturalists alike that Cuckoos are rarer now. It says something that a bird that would have been regarded as interesting but commonplace in my youth is now ‘best’ bird on my BBS survey.

There was another reason why Cuckoo got to be ‘best’ bird (no it wasn’t displaced later in the survey) and that was because I thought many Cuckoos might well have left the UK by late June. As you will remember;

Sings his song in May

Changes tune in the middle of June

And then he flies away

That was the version I learned as a child and the Cuckoo satellite-tagging studies by the BTO and others elsewhere in Europe and beyond show that ditty to be true. As I wrote CK on the recording form I thought I’d recently seen something on social media about some of our Cuckoos being far away already and when I got home and checked (here) I found I was right. Charles, a Cuckoo from Knepp in Sussex, was already in France and on the evening of the day when I was listening to a male Cuckoo in North Northants Charles was in Occitanie near Tourbes in the south of France. Yesterday Charles was on the Algeria/Mali border, so he is definitely racing away. Cuckoo JD had got south of the Pyrennees when I was listening to my ‘best’ bird and many other Cuckoos were on the move too, so I was right to regard my Cuckoo as a good Cuckoo record at a time when the UK was emptying of adult Cuckoos, perhaps particularly of males.

I was pleased to add Red-legged Partridge to the list and Skylark numbers were pretty good, and the Yellowhammers were where they usually are, and as I got back to the car there were some House Martins and Swifts in the air, but that Cuckoo was the ‘best’ bird in that I heard its song for some of the rest of the survey – it was belting out song as though it felt the weight of responsibility to fill the Northants air with that once more familiar sound. Or, more likely he was desperate for one last sexual encounter before the long flight to the rainforests of Central and West Africa and the perils of the return journey back to here next year when sex could start again in April. Well, I presume, or imagine, too much. I know nothing of that Cuckoo’s sex life, he may be a virgin male full of frustration at a summer without meeting a female Cuckoo at all. All I know is he was the ‘best’ bird and allowed me to write an encircled CK (indicating singing Cuckoo) on a sheet of paper, and then enter that record by computer and contribute that record and all the Woodpigeons, Carrion Crows and Wrens that accompanied it into the great mix of standardised BBS records.  Job done for another year.