A couple of days ago the RSPB sent out a strongly worded press release, which I reproduced here, which was entitled ‘Defra asleep at the wheel in bird flu emergency’.

I tweeted about it later that day:

I received a response from Richard Benyon himself:

It’s always good to have got a Minister’s attention so I followed up with a thread of tweets which I have edited down to this more readable version (but without editing the content);

Don’t shoot the messenger Richard. It’s the RSPB that thinks Defra is asleep at the wheel. Personally, I’m not sure that Defra knows where the wheel is…

But anyway, you sound rather defensive.

I was in an NGO meeting with Defra last week – have you had a report from that meeting? Defra seems to think that bird/poultry flu is solely an economic issue but it is now a conservation issue and could be a public health issue too. You, ministers, need much more understanding of the biology of the issue to be able to deal with any of those aspects.

Saying ‘wild birds’ over and over again doesn’t really do very much. Which wild birds? The Defra statement at the end of yesterday’s Guardian piece is hardly the response of a department on top of the subject.

What is Defra’s view on the current situation? For poultry, for conservation and for public health?

What is Defra’s view of the future scenarios – for poultry, for conservation and for public health?

Your surveillance is only of dead birds – isn’t it? And a very limited range of species.

How do you think that Roseate Terns got bird flu on Coquet Island? They came back to the UK in May after spending the winter off West Africa. Bit puzzling isn’t it?

As a biologist I’d be looking at gulls in more detail – what do your experts say?

Gulls (several species) is just a guess. Where might gulls pick up bird flu virus? They are scavengers – is that relevant? Some of the other species that have tested +ve are also scavengers but maybe that’s just a fluke.
Might it be possible to test live wild birds? I don’t know – do you? Maybe a programme of monitoring of a range of species is needed. By analogy to covid, it would be helpful to have the equiv of lateral flow tests for some wild bird species.
If scavenging is a feasible route for exposure (is it?) then that has implications for corpse removal. Should it happen or not?
Has Defra told nature reserves NOT to remove corpses? Do you know? I hear of a nature reserve on the coast where there were bodies of terns and gulls littering the site but corpse removal was not allowed by Defra – is that true? On what grounds? Human health? If so, what does that say for the general public. Could you clarify please?
By the way, those seabird corpses were being scavenged by Carrion Crows (the clue is in the name).
But it is not up to me to advise you, Minister. You have a whole department full of experts on which you can call. Have you called? Have you really looked into this properly?
If so, why is even the RSPB saying that Defra is asleep at the wheel? I was never that outspoken when I worked for them, was I?
There are many wildlife conservation NGOs who are struggling to get any sensible or consistent advice from your department on this issue. Defra needs to demonstrate some grasp of this range of issues – maybe making a statement or two might help?
My free advice to Lord Benyon and other Defra ministers, and the civil servants involved, would be to get some pretty good advice pretty quickly. There is form for Defra and its predecessor departments to get considerably thrown off course by diseases – Ash dieback? BSE? Foot and Mouth? In fact F&M was a major factor in the setting up of Defra as a department and the demise of MAFF. But in recent years it feels that Defra has become more and more MAFF-like.
A few more points to follow up:

I can’t see any cases in this time period in Wales or Northern Ireland and it’s hardly a tidal wave of cases in Scotland and England. There are no restrictions, as I understand it, on allowing poultry outdoors. Let’s see what happens, but there is a bit of a mismatch between bird/poultry flu ripping through some wild bird populations and a fairly low rate of new cases in commercial premises. And although the two Scottish cases were on Orkney and Shetland, seabird hotspots, the spread of commercial cases doesn’t particularly reflect anything we think we know about the outbreaks in wild birds. It’s a conundrum as far as I am concerned.

Here’s an example of a duff monitoring scheme, in Northern Ireland; 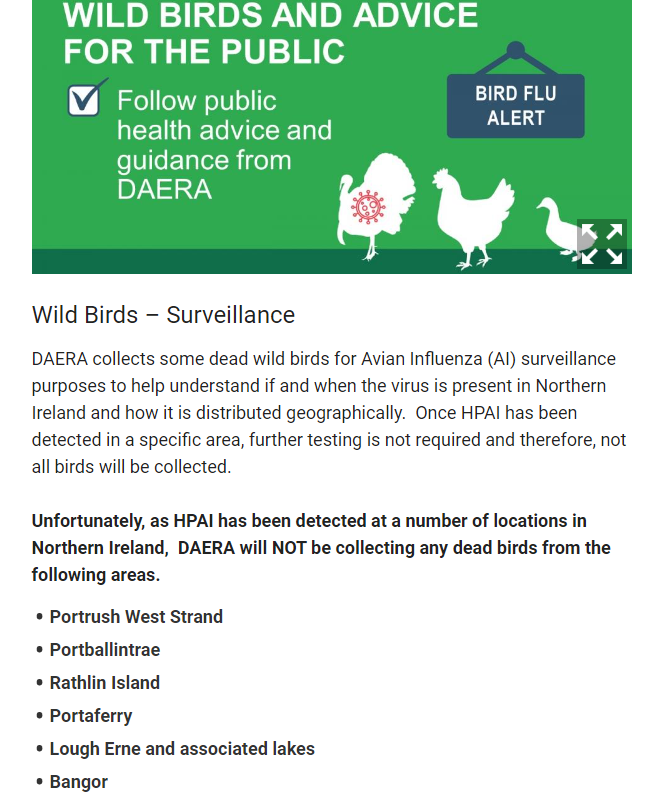 In the absence of a DEFRA action plan, the RSPB have provided this:

5 things that could/should/must be done now to help wild birds.