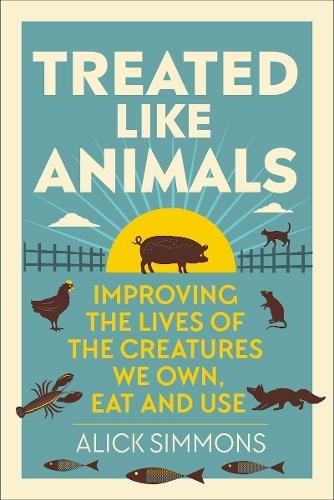 This is a brilliant book and I recommend that you buy it and read it – or at least, since it isn’t actually published yet, pre-order it. Despite the fact that it won’t be published until February it will be one of this blog’s books of this year, without doubt.

Before telling you why I think so much of this book, I should point out that I know the author, as do regular readers of this blog as he has written a series of guest blogs here (see here), some of which explored the issues dealt with in more length in this book.

The author is a vet, and one who was the UK’s Deputy Chief Vet for eight years and so has experience of animal issues from a practical and policy perspective. He is also a keen naturalist and wildlife photographer.  He is also a thinker, and I get the feeling, a worrier, about the issues of animal welfare across the board: farm animals, pets, animals in research and the various ways we treat wild animals.

When he writes that ‘A rat is a rat is a rat’ he nudges us all to think of how and why our treatment of pets, ‘pests’ and research animals might differ so widely in its regulation and in how, generally, we think of it.  And why are many happy with the idea of eating lambs but disgusted at the idea of a meal of puppies?

It is clear that the author eats some meat and catches some fish, but also that he has set boundaries on both of those behaviours that have been informed by his thinking about animal welfare issues. Throughout, there is a recognition that different people will set their boundaries in different places but the book provides plenty of information and analysis to make many of us shift away from many in-built societal manifestations of animal exploitation. The book is not preachy, but it is well argued and well informed, and if read carefully will lead many others to face up to the choices we all make without too much thought at the moment.

Compared with another book reviewed here recently, Through a Vet’s Eyes, also by a vet, this volume delves far more into animal welfare issues in nature conservation (a whole chapter), the issues associated with hunting, shooting and fishing, and massive killing sprees such as the Badger cull. That is probably a significant advantage for readers of this blog, although, I’ll be glad to have both books on my shelves and I note that where they cover the same areas they tend to be pretty much in agreement.

The first two chapters here, The Exploitation of Animals and Why Aren’t All Animals Treated the Same Way? are excellent and thoughtful introductions to the issues. They are followed by chapters that explore different types of animal exploitation and the book ends with two chapters bringing things together in A Personal Ethical Framework and Making Sense of It All. It all feels like a sensible and intellectually satisfying treatment of difficult and high-octane emotional issues.

The cover? Yes, it demonstrates something of the range of species that are covered in this book and is attractive. I’d give it 7/10.

Treated Like Animals: improving the lives of the creatures we own, eat and use by Alick Simmons is published by Pelagic Publishing.