I did a strange thing in a zoo today.

My days are beginning to fall into a certain order.  Wake at 5am after a good night’s sleep and without an alarm, check emails (‘cos Europe is already up), shower, move stuff into the car and then hit the road. And so I headed North from Somerset, Kentucky at around 630am this morning. 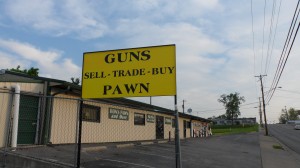 At around 730 I was looking for breakfast in Lancaster.  The first thing I noticed about Lancaster was Ron’s Pawn with a big sign saying ‘Guns – sell, trade or buy’ and he was open.  It’s clearly never too early to think of lethal weapons in Lancaster.

I did a little loop around the town and found what I hoped to find – a quiet cafe selling breakfast.  This was called Wajaba’s Too and I had a delicious breakfast of pancakes, bacon and coffee.  I told the waitress, Anna, how good the pancakes were and then we got to chatting.

I asked Anna what Lancaster was like.  She said it was…a bit of a pause…and then we both said ‘quiet’ and laughed. I didn’t ask whether that was because all the guns were in pawn but instead pointed to my bird book, said I was travelling around the USA birding, and asked whether I could ask her what might seem a daft question.  The cafe wasn’t busy the only other customer was a grumpy looking man whom, I noticed, didn ‘t say ‘thank you’ when Anna served him.  We English have lovely manners apparently.  In fact a friend claims a crowd gathered around her on an AMTRAK once because she could eat with a knife and fork at the same time!

Anyway, my question was ‘Have you ever heard of the Passenger Pigeon?’ and Anna said ‘No’.  I wasn’t surprised, but over a refill of coffee explained that maybe 120 years ago that the Passenger Pigeon had lived around these parts and had been the commonest bird in the world – maybe 9 billion of them.  But that on 1 September 1914 there was only one remaining bird, a female, called Martha, who had died in Cincinnati Zoo and I was heading to Cincinnati Zoo this very day to look at an exhibit there.

Anna clearly thought I was a little strange but wanted to know why the bird had died out.  I said that we don’t really know but habitat destruction, shooting, trapping and imported diseases may have all played their parts.  But wasn’t it amazing that a bird went from commonest in the world to extinct in about 50 years?

We chatted a little longer about my trip and then a little later I got up to pay.  Anna emerged from out-back and, with a smile, said ‘Your breakfast is on me today.  It’s been so nice talking to you and I hope you enjoy your trip in America – it sounds really great.’. I argued a bit about this – after all the breakfast had been very good and the chat had been good too – but Anna insisted very nicely and so I thanked her again and left a tip covering half the breakfast in the jar by the till.  The kindness to strangers of small-town, quiet-town, gun-pawned town, America.

So it was on up the road with a cheap breakfast inside me and I was thinking that Kentucky was a bit dull until I passed Keeneland Racecourse when I perked up.  I noticed there were signs up for ‘Drive thru betting’.  Americans like driving thru to do most things.  There are probably drive thru births, toilets, brothels and cremations. 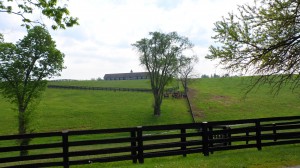 Further on, I saw a sign to the Buckley Wildlife Sanctuary and decided to give it a go.  It was worth it.  The road first took me through some lovely country and past the Pin Oak Stud with its own small private racetrack – presumably for training thoroughbreds – and there were some beautiful looking horses in the fields.

When I got to the wildlife sanctuary I was relieved to see that it was what we would call a nature reserve and not a home for injured birds and mammals. And I got to meet Tim Williams the Sanctuary Manager.

He’s a character and was kind enough to take me down to the blind (we’d call it a hide) which was small but had one-way glass so that we could look out but the birds couldn’t see us.  We looked out over some feeders, a pool of water, the woods and a small lake.

I asked Tim how long he’d worked here and the answer was 37 years- so he knew the place!

Tim gave me his card – he has a neat trick with this that must go down brilliantly with kids.  He showed me his card, both sides, and it’s blank.  Then he puts it in his closed fist, pushes one knuckle and makes the card, still blank, come out from his fist like paper from a fax machine. He does this a couple of times and then presses another knuckle and out comes the card with his details on it.  It’s very neat – I’d like to see it again to see whether I can spot it this time.

And Tim can talk – he was good company.  The conversation turned to grey squirrels and it is clearly one of the species whose popularity level is low.  Tim reckoned squirrels make good gravy – you cook the squirrel, throw it away and eat the gravy.

But racoons are worse – for the damage they do to other wildlife but also property.  Tim’s line on these was that squirrels and racoons were both born with engineering degrees but that racoons graduate to PhDs they are so clever at damaging things!

I turned the conversation around to Passenger Pigeons but Tim wasn’t too genned up on them and the couple from Indiana weren’t too sure either so I went for a lovely walk round the woods and meadows – seeing Fox Sparrow (which I recognised) and Mockernut Hickory (which was labelled).  It was a relaxing walk – I imagined thousands and thousands of Passenger Pigeons pouring over in a seemingly never-ending stream as John James Audubon had once seen.

And onwards, past another thing, apart from racehorses, that makes Kentucky famous – the Jim Bean Old Crow Bourbon distillery.

Cincinnati is just across the Ohio River in Ohio State.  Approaching it on Interstate 75 you get a great view of the tall buildings before you leave Kentucky (which I decided was really quite interesting). 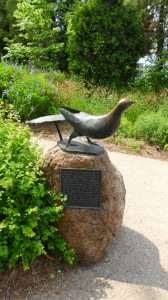 At the Zoo I paid my $10 to get in (and it’s another $8 to get out of the car park), got the map and set off in search of the Passenger Pigeon Memorial. It’s easy to find -past gorilla world and it’s on your left.

The small pagoda hut has good information about the fate of the passenger Pigeon as a species and the fate of its last representative on Earth – that female called Martha.  Martha was hot news in her last few years of existence, people flocked to see her, and her death on 1 September 1914 was a national story.

On her death, Martha was shipped to Washington DC, packed in ice, and she is in the Smithsonian Museum – although not on display (David Blockstein, from the National Council for Science and Education had told me, as we lunched at the Tabard Inn last week, that rumour has it she is in the Director’s office there).

David and others, including Dan Marsh from Cincinnati Zoo, are planning events to mark the upcoming centenary of Martha’s death in a few years time. I wish them well.

I think we sometimes overrate the importance of species’ extinctions but the Passenger Pigeon was phenomenally abundant just 50 years before being reduced to a sad widow we called Martha in a cage in Cincinnati Zoo.  That is a cautionary tale to keep in mind and spread around, for sure.

There is a bronze statue of a Passenger Pigeon by the Memorial and it carries a plaque which includes the following words:  ‘It is the hope of the Langdon Club that people who visit this memorial will want to work toward the preservation of all the world’s fauna’. I do. 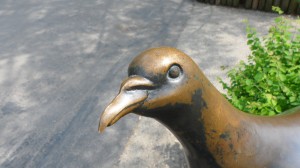 There were two more things I did at the Zoo.  First, I sat across from the memorial and watched the people go past – and go past they did.  120 passed the memorial without a single one looking at it.  Fair enough – let’s concentrate on the living rather than the extinct.

But as I left I went into the Zoo Shop to buy a hat and some post cards.  I would have bought a little memento of Passenger Pigeons if there had been any, but two different shop assistants confirmed that in the well-stocked shop there was not a single item with a Passenger Pigeon on it.  Retail managers are a canny bunch – they don’t use shelf space for non-sellers, so that is further confirmation that it is only a strange Englishman who travelled 3000 miles and has been looking forward to visiting this Zoo for months that would have parted with cash for a memory of Martha.

And that strange thing I did in the Zoo?  I imagine I was the only person who visited the Zoo today, perhaps this year, perhaps ever, who came to remember an extinct species and didn’t look at a live animal.

There’s much more to say about Passenger Pigeons, other extinct wildlife (and a further link to Cincinnati Zoo) and extinctions in general – but that will do for now.

Today’s soundtrack – American Anthems CD No. 2 where I discovered the wit of Crash Test Dummies.

6 Replies to “Homage to the Passenger Pigeon”