Yesterday evening I drove through the north Ohio landscape looking for a cheap motel.  I travelled parallel with Interstate 75 on smaller roads including Route 66 (though not that one) for a while.  It was like travelling through The Fens – the roads dead straight until you come to a 90 degree turn, the landscape dead flat, the fields all arable with no fences, walls or hedges, only the scattered large farmhouses and the occasional wood broke up the landscape.

And as I set off this morning, about 630am, from my cheap motel, I picked up the same landscape again. It was like driving across The Fens for a day’s birding in North Norfolk.  The journey a bit dull but a growing sense of excitement as one neared the destination.

The destination was Crane Creek/Magee Marsh on the coast – the coast of Lake Erie.  As I got close I asked the folk at the Black Swamp Bird Observatory and they pointed me further down the road and said I’d know when I got there as there would be 200 cars in the car park – they were right about it being unmissable but there were closer to 400 cars there.

Wallace Kornack had pointed me in the direction of this place as we talked in Rock Creek Park – he said it was  a place to see warblers up close.  And it is.  You can see hundreds of birders up close too – and that’s a mixed blessing.

But, for English birders, Crane Creek is a bit like the wood at Holkham stuck on top of the marsh at Cley and then a system of boardwalks installed above the swamp.

The place was packed.  The boardwalk is about 5 feet wide and when 200 people are waiting for a Connecticut Warbler to show you can’t move. 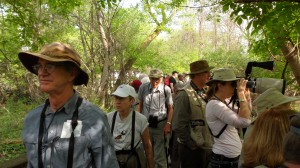 Under such circumstances birders show their best and worst sides.  Through the day there was some tetchiness when people got jostled, blocked or unsighted but I met some really nice people out on the boardwalk.

I eased through the Connecticut crowd as soon  as I could but the rest of the boardwalk was pretty busy too.  The four rarest warblers of the day were apparently Connecticut, Mourning, Cerulean and Worm-eating – I saw two of these which was probably pretty good going.

You do have to imagine somewhere like Holkham Pines, the Scillies or Portland Bill when there has been a fall of migrants to catch the atmosphere.  As a Brit, and as me, I wasn’t too worried about seeing the rare ones, I was keen on seeing the common ones up close and personal – and that’s what I did.

I saw 19 species of warbler today, being: Black-throated Green, Black-throated Blue, Black and White, Parula, Yellowthroat, Yellow-rumped, Prothonotary, Bay-breasted, Chestnut-sided, Cape May, Magnolia, Canada, American Redstart, Ovenbird and these three which were new for me; Yellow, Wilson’s and Blackpoll as well as the two rare ones I haven’t yet told you about.  And all, without exception, were seen very clearly at some stage during the day.

It’s quite interesting being a pretty good  birder like me in a country whose birds you don’t know well.  You know how to look but you don’t always know the significance of what you have seen.  So I know how to look at a warbler – does it have a wing bar? is it streaked? how far do the streaks go? – when I have that information I may spend a few minutes with the Field Guide working out what I have seen.  And that’s tricky too – how long do you watch before you check the book? Short watches may not collect enough information but long watches may leave no chance to look again with the knowledge from the Field Guide in your head.  Don’t smile like that – this is serious stuff!

But admitting to being English got me a lot of help and in turn I was sometimes able to help others.

So which were the other two? The Worm-eating was only seen early morning so it wasn’t that and a few Ceruleans were seen but they all seemed very high and mobile.  So I saw Connecticut and Mourning.

I went back to the Connecticut spot when the crowds had died back a bit – but it was still busy.  This little warbler walks about on the ground rather than flicking about in the trees so it takes some spotting.  To be honest, only its Mum would think it was lovely, but it was a triumph to see it at all.

But the Mourning Warbler illustrates a truism of birding – if there’s one there may be more, so leave the jostling crowds and find your own.

I wasn’t too fussed whether I saw a Mourning Warbler or not – don’t get me wrong, my preference was to see it – but if I didn’t, no sleep would be lost.  But I looked it up in the book and kept it in mind as I warbler-watched.

And about 20 minutes later I found one.  I was pretty sure it was one but I looked it up in the book to check – it was.  And then I refound it through binoculars, and then I wondered how sure I was and whether I should announce it to the 30 people nearby when a lady down the boardwalk shouted “Mourning’ and 30 people gathered around to see.

So there usually is more than one, and that was shown to be true later in the day, near the visitor centre, when I went for a walk and found another one.  There was no-one to tell at the time, so I am telling you now.

Full-on birding, and great fun.  19 species – pity I didn’t make the 20 but a great day.  I’ll be back there tomorrow but I won’t inflict a bird list on you tomorrow – unless it’s a really really good one.  I will blog on the costs and benefits of birding.

Cup Final tomorrow – Man City to win in 90 minutes would be my bet.