Adonis was the subject of a tug of love between Aphrodite and Persephone because of his great beauty.

The Adonis blue is pretty good-looking too and restricted to chalk grassland sites such as are to be found in Dorset, so Wednesday, after being stood up by white-beaked dolphins, was Adonis blue day.  Butterflies are pretty unpredictable though – climate change has thrown them out all over the place in terms of timing of emergence and they are weather dependent anyway so they might just keep their heads down when you go to look for them.

I sat on the ancient Maiden Castle looking north towards Dorchester and trying to avoid looking at the giant carbuncle on the edge of Dorchester (Hardy‘s Casterbridge) that is Poundbury.  Actually Poundbury looks like a toy town – the type you used to get for train sets where there is nothing behind the facade.  I went to check it out a bit later and found that there were posh bridal outfitters and florists behind the facade, so that’s all right then.

It was really too windy for butterflies, but occasionally a white would be blown past.  Instead, I watched the combine harvester below hoover up the wheat at £160/tonne.  In the old days there would have been a gang of men with terriers and guns waiting for the last cut of wheat to flush out something worth eating or killing. Instead a couple of lesser black-backed gulls seemed to be keeping an eye on things and a buzzard sat patiently on a post.

After a while, a roe deer burst from the crop, invisible to me until it fled, quite some time before the last pass of the harvester.  The deer ran to the fence around the field, stopped and then eased itself over the substantial barrier with no apparent effort.

Another white butterfly was swept past in the wind.

There was a flock of dull-looking brown birds playing dare with the combine – fleeing at the last moment as it captured the wheat in its rotating blades.  There were quite a few of them – adults and young feeding in the fast-harvested crop and flying from the combine each time it approached.  They flew to the fence, lined up as a row of khaki soldiers and sometimes flew down to my side to the ancient grassland that was devoid of Adonis blues.  It took me a while to realise they were corn buntings – but they were. 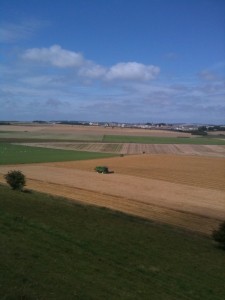 As I watched the corn buntings I noticed that their tails were very light compared with their backs – I’ve never noticed that before.  Maybe it was the angle I looked down on them.

Corn buntings suffer from being foolish late-nesters – their nests often get scrunched by the combines and I think that happened below me as I watched.  Certainly there were lots of corn buntings around, the young ones should have been thanking their parents for nesting early, but it looked like there was at least one nest in the last band of wheat to be swept up by the combine.

No exciting mammals rushed from the wheat as the combine finished its job and the grain wagon rushed off to the grain store and the baler came in to turn the straw into neat solid rectangles.  But another white butterfly was swept by.

Others saw Adonis blue at Maiden Castle recently, but then they may well have seen white-beaked dolphin in Lyme Bay too.  I just saw a rather ugly Poundbury on the horizon and corn buntings being scrunched in the wheat field.

Around a couple of thousand years ago the Romans scrunched the Durotriges in these parts, but Maiden Castle had already been  a settlement for 4000 years by then.  It’s difficult to imagine how many corn buntings, how many butterflies and how much of Poundbury will be left on this site in 200 years let alone 2000, let alone 6000 years into the future which is how long Maiden Castle has had a past as a human settlement.  Dorset has the habit of reminding you of the length of the past which always makes me wonder about the length of the future.

There were a few small heaths flitting around in the grass near the car park as I left without seeing an Adonis blue – they seem exactly as abundant as white-beaked dolphins round these parts.  Or maybe Adonis is still dividing his time between Aphrodite and Persephone.

9 Replies to “Beautiful butterflies were missing”