I’m glad to see that the RSPB is hoping to have a wind turbine at its Bedfordshire HQ – this has been a long-running hope and I wish the plans well.  And it is a sensible thing to do for an organisation that supports a move to renewable energy. 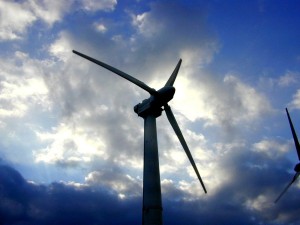 Martin Harper, RSPB Conservation Director said: “We are keen to promote the use of wind energy where it does not result in unacceptable impacts to wildlife and we are confident that this is a suitable location to do so.

It isn’t quite right to claim that this will reduce the RSPB’s carbon footprint as everyone knows that you can’t get thin just by eating more lettuce.  It’s only if government makes the right decisions about overall energy production that emissions will drop (or if we just cut our use of energy that would work too).  If everyone had a wind turbine, but also used as much ‘dirty’ electricity as now then all those extra wind turbines wouldn’t have done any good (in terms of reducing future climate changes) – they would just be additional power generation. We do need to reduce our use of fossil fuels and replace that lost generated electricity with cleaner electricity.

But at least a recent study by the RSPB and BTO suggests that wind turbines are not all giant bird mincers! In the uplands there was evidence that some species, such as snipe and curlew, decrease in numbers during the construction phase of a windfarm (presumably through disturbance and habitat loss) and may not recover afterwards.  As the RSPB’s Jeremy Wilson said, it all depends on where you put the turbines – which is what the RSPB has been saying for years (and quite right too!).

One of the things that I have more time to do these days is pay a little more attention to events near where I live.  A few weeks ago there was a public meeting to discuss proposals for a relatively small limestone quarry.  Your views on whether it is small or not may depend on how close to your back garden it is.  None of the locals seemed very keen on the idea (and I can understand that).  The irony of the case, only to be appreciated by those not too closely affected, is that there were proposals for a small number of wind turbines on the same site a while ago which were strenuously fought by locals too.  On the night, many were of the view that they’d rather have the turbines than the quarry so there is an element of out of frying pans and into fires involved.  I’m rather assuming that because the site is (at least partly) in the local minerals plan then it is likely to go ahead and that it will be a victory for the NPPF.  We’ll see.

According to the always reliable Daily Mail, the government has turned its back on wind turbines.

I’ve rather lost track of whether this government does have a coherent plan to meet the legally binding 80% emission reductions by 2050.  Greenest government ever meets presumption in favour of sustainable development?

You may remember that I can see 10 turbines from my house – they are , though, quite a long way away.  I’d be happy to see more in the countryside around me provided they are put in sensible places.  And by that I don’t mean ‘somewhere else’, I mean in places where they don’t do (too much) harm to wildlife, do produce useful amounts of electricity and don’t mar our finest landscapes.

I quite like the turbines in my local landscape – they certainly aren’t the ugliest things around and at times they can be very beautiful.  But even if I hated the sight of them I should be asking myself whether I had a better way of reducing our carbon emissions? We need to find a lower carbon diet and substituting lettuce for burgers, or turbines for coal, will help.  There’s no single measure (except perhaps reducing the human population dramatically) that will get us where we need to be so it will have to be done with lots of smaller measures.

Well done to the RSPB for seeking to generate some green energy, it’s a small but meaningful contribution provided government steps up to play its part properly.

26 Replies to “Is the answer blowing in the wind?”