It’s May, it’s raining and for the first time for many a year, perhaps ever, I haven’t seen a cuckoo in April. 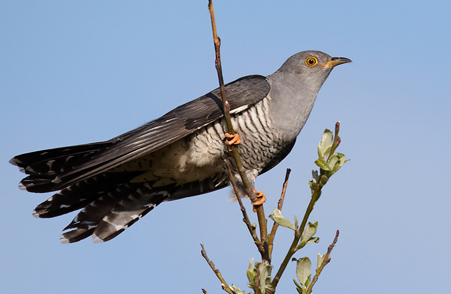 My Birdtrackrecords going back to 2005 show me that I have always seen a cuckoo by now. I went out in a fine spell on Monday thinking that I should hear a cuckoo but I didn’t , and I was cheered slightly by the fact that another local birder whom I met had yet to see or hear one too.

I think of myself as Birder No 3 at my local patch as Birders Nos 1 and 2 have been birding there much of their lives and still get down there more often than I do.  Birder No 2 told me that Birder No 1 had beaten both of us to cuckoo this year.

But the good news is that two BTO cuckoos, whom we have learned to call Lyster and Chris, have returned from their 10,000 miles round trip and are back’ home’.  Lyster got back to the Norfolk Broads on Monday and Chris snuck into Epping Forest on Tuesday morning.

I admire this project hugely – it combines the soap opera and the science.  By following these individuals we learn about the details of their lives and the general behaviour of their species.  Yes we knew that cuckoos went to Africa and then came back again – but we’ve never before been able to follow the details of their journey.

Great congratulations to all at the BTO for this amazing study.

11 Replies to “Say hello to the cuckoo”