At the weekend I went on a twitch, looking for a rare bird – except it is just a rarer bird rather than a really rare one.

I realised that I didn’t see a spotted flycatcher last year, partly because I was looking at mountain bluebirds instead, and I hadn’t seen one yet this year either. 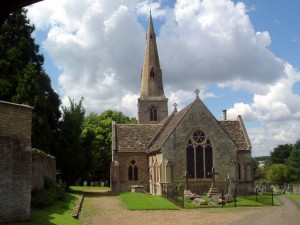 The spotted flycatcher is a bird in decline, all over Europe, and there are many places where I used to see them and now never do.  And I miss them.  They aren’t the most amazingly attractive of birds but they have an understated elegance and style which I wanted to enjoy again.

As I approached the church, just as in the image here, I walked to the right and looked at a few of the gravestones scattered across the freshly cut grass.  In the far corner of the churchyard there were fewer gravestones and the grass remained uncut as yet.  Seven male orange tip butterflies flew among the cuckoo flowers presumably waiting to intercept any passing females.  I watched them for a while but no female butterflies arrived.  And so I started looking for orange, orange tip eggs on the cuckoo flowers but couldn’t find any at all.

I watched the orange tips fluttering over the very green grass for a while and realised that I have hardly seen a female orange tip all spring and I haven’t found a single orange egg yet.  The cold and dreary spring can’t have been good for them.

However, today was a hot day with a clear sky.  A chiffchaff sang from the adjacent woods and a swallow called as it flew over. 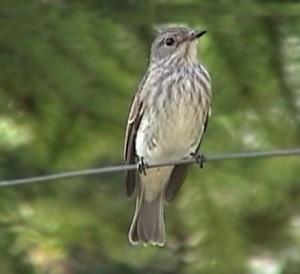 A red kite circled overhead and it was already moulting its wing feathers – there was an obvious gap in each wing.

I sat on the stone wall in the sun and imagined a spotted flycatcher sitting on one of the gravestones – it would look quite perfect –  but there wasn’t one.

I thought I heard something like a spotted flycatcher call behind me but I really wasn’t sure.  It’s not a very distinguished call after all – lots of birds make thin ‘seep’ noises under a variety of circumstances.

And then I saw one – I bet you knew I would didn’t you? It was perched upright, facing me, out in the open on a horizontal branch.  It was in the direction where I thought I might have heard a spotted flycatcher – so maybe I did.

This spotted flycatcher didn’t put on an amazing display of flycatching dexterity for me but it did sit around for a while giving me a good view before changing perch a few times and then heading out of sight.  I didn’t see it catch a fly or anything else.  It was joined by another spotted flycatcher for a while, although not very closely joined, so it wasn’t clear to me 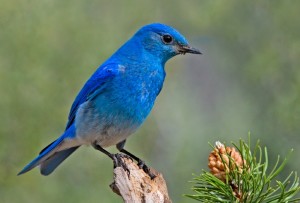 whether they were a pair or just neighbours. The bird which joined the first spot fly did at least have a big insect in its beak when I saw it but I didn’t see it catch anything either.

I enjoyed my five minutes with the spotted flycatchers in an English churchyard on a hot May afternoon with the orange tips fluttering over the grass.  It’s good to know that they are still around and I felt pleased that I had chosen this as a place to find them – pleased that I had selected this lovely spot and pleased to be proved right that this was spot fly country.

This grey bird, the John Major of England’s birds, should remain a part of our lives.  I’m glad it was an important part of mine last weekend.

And finally, for the next 20 days you can find me writing a daily blog back on the RSPB website.  I’ve been asked to write about sustainability and biodiversity in the run up to the international conference in Rio de Janeiro on 20-22 June.  I’ll put the link in here when I have it.  But there will also be a daily blog here.  I have a feeling there will be more on Wuthering Moors and more on hen harriers – who knows, there may be more on buzzards too?  But I’ll try for a bit of variety too – GM crops are back in the news, declining farmland birds across Europe and other aspects of the natural world too.  I have some good books to review as well.  Time to scribble, scribble, scribble.

24 Replies to “Gone twitching – not really”