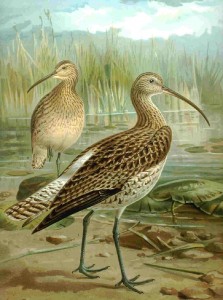 There is a fascinating comparison between the population trends of curlew recorded by the BBS and by the new Atlas.  The two maps are very similar which is reassuring.  Both show general declines in curlews in most parts of their range.  Wales is a disaster area for curlew and most of northern England and southern Scotland are too.  There is a suggestion here, on the face of it, for a positive impact of red grouse management as there are very few areas where curlews have increased but they include the grouse moor areas of northern England (roughly, by eye) and part of south and east Scotland.  However, it isn’t that simple as the curlews in parts of the Lake District and the Western Isles have increased too.  It’s an interesting pattern though which would perhaps reward a more formal analysis than a quick glance.

I’ll read the report in more detail over the next days and weeks. However, it is always worth repeating the great service that unpaid volunteer observers do by counting birds on over 3200 squares scattered across the UK.

Some of the story of the development of the Breeding Bird Survey is told in Chapter 4 of Fighting for Birds – available now.