On Monday the sun was shining and I suddenly thought – why not go and enjoy it? So I did. 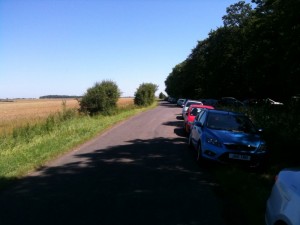 Summer sun means butterflies and I headed to Fermyn Woods to see if it might be third time lucky in looking for purple emperors.

The long line of cars parked by the road on a Monday morning suggested that I wasn’t alone in my quest and that it wasn’t a hopeless one either.  As I walked along the line of cars I noted several with National Trust stickers (which give access to NT car parks) and a few Butterfly Conservation stickers too, which made me wonder why the RSPB isn’t asking me to advertise my support for them with a car sticker.

Turning down the track into the forest I could see plenty of people ahead – and some of them were pointing cameras at the mixture of dusty earth and occasional relict puddles of the straight track through the trees.  This looked promising.  Just as I saw cheetahs in Kenya, and grizzly bears and wolves in the USA through seeing people watching them, it looked as though I would see some butterflies by reaching the people who had already found them.

An elderly couple ahead of me were looking at a butterfly on the track which I first thought was a white admiral (because I am a cautious butterfly watcher) but was indeed a gorgeous purple emperor.  I had only walked about 50 yards – isn’t life easy when the sun shines?

We looked at this magnificent butterfly for a while.  It kept its wings closed for most of the time, but the underwing is very impressive anyway, but then occasionally flicked its wings flat against the path and then closed them again.  Those purple upperwings are stunning.  What a beast!

My 36 year-old Zeiss 10x40B binoculars don’t focus close enough for butterfly watching so they are a bit useless in these circumstances but the butterflies were very accommodating – as were the butterfly watchers.  An old chap told me some of the details about the reintroduction of purple emperors into these woods many years ago and of the loss of chequered skippers from the county.

There were lots of photographs being taken and not just of purple emperors.  Several white-letter hairstreaks, a butterfly I have rarely seen , were also visiting the track and allowing men with cameras (all the photographers were men even though the gender ratio was about 2male:1female).

There were also some whites, commas, meadow browns, ringlets and a couple of white admirals too.  A regular blog-reader asked me whether i was going to do a blog on my least favourite buttefly.

A successful trip – and so time to celebrate with a pint of beer outside the Snooty Fox pub (which gets a mention in Chapter 8 of Fighting for Birds), except that the Snooty Fox appears to be closed on Monday lunchtimes.

But, having decided that a pint of beer (just the one) was what was needed, preferably supped in a garden from which red kites could be enjoyed, then I had to seek out a suitable replacement alehouse (this is the type of stubbornness which means that NE and Defra should expect the details of Walshaw Moor to be prised out eventually).  There were kites everywhere, and a few buzzards, as they were enjoying the sun too.  There really was not a single cloud in sight for most of this time.

I found myself at Slipton at the Samuel Pepys with a pint of beer in hand looking at a flowering buddleia in the garden and hoping for more butterflies.  But I wasn’t expecting more than a few large whites and meadow browns – which I saw.  But also, a marbled white flew past the buddleia, perched on the grass, flew around the garden, perched again and then flew off.  That was a surprise – a very nice surprise.

I drove home and saw a few more red kites and buzzards.  I had only been out for just over a couple of hours.  this is the life – when the sun shines!