Last week Environment Secretary Owen Paterson launched work on Europe’s largest man-made wetland nature reserve – at least so say the RSPB and Crossrail whereas Defra is noticeably silent on the matter.  Luckily, there is photographic evidence of the event.

In an amazingly complex and difficult project, for which the RSPB’s Chief Executive Mike Clarke deserves great credit, thousands of tonnes of soil which are currently under London will have coastal waders like knot running around on them in a few years time.

For an engineering project like Crossrail, digging out a tunnel leaves you with the problem of where to put the soil.  Having rejected a ‘Great Escape’ type of solution involving Boris Johnson criss-crossing London on his bike letting the soil out of his trouser bottoms, Crossrail were delighted to find that the RSPB had a suitable site that needed a few more inches of height.  4.5 million tonnes of soil will be moved to the Essex coast at Wallasea Island to help construction of a new coastal wetland from an existing area of reclaimed farmland. 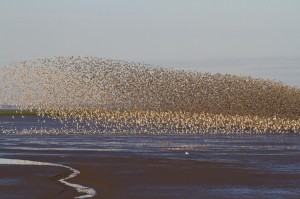 Environment Secretary Owen Paterson said: “The excellent work that Crossrail and the RSPB are doing to create the Jubilee Marshes at Wallasea shows how major infrastructure schemes can help to generate economic growth as well as helping to improve local wildlife. This could be the gold standard against which all future projects are measured.”

Mike Clarke, Chief Executive of the RSPB said: “This is the largest coastal habitat creation of its kind in Europe and it will transform an area more than double the size of the City of London back to the coastal marshland it once was. Wallasea Island will show for the first time on a large scale, how it’s possible to ‘future proof’ low lying coasts against sea level rise caused by climate change. This will deliver benefits to wildlife and provide a wonderful place for people to enjoy. Wallasea Island could now see the return of birds that once bred in England, such as Kentish plovers that were last seen here more than 50 years ago.”

Crossrail Chief Executive Andrew Wolstenholme said: “This landmark project is a pioneering example of how the construction industry and environment groups can work in partnership to build a sustainable Britain that benefits both the economy and the environment. Crossrail is delighted to be involved in a project that will leave a lasting legacy long after the construction of the new rail line has been completed.”

Because of sea level rise (aided by the coast bouncing back after the Ice Age) saltmarsh in southeast England is being eaten away.  Government has set a recreation target of 3600ha of saltmarsh and mudflat by 2015 – 670ha of this will be produced at Wallasea.

Instead of habitat being lost due to sea level rise caused by climate change, it is hoped that the habitat created through this project will provide a home for southern species such as Kentish plovers that may spread north because of climate change as well as masses of wintering and passage waders.

18 Replies to “Taking mud to Essex”