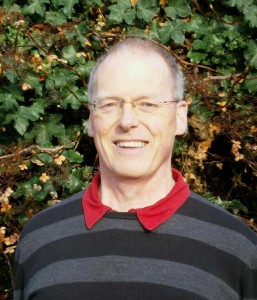 Hugh Brazier was at school with Mark Avery a long time ago. He then spent many years in Ireland, where (among other things) he frequented seabird colonies off the west coast, ringed lots of puffins and storm petrels, and edited the journal Irish Birds. He is now based in York, where he works as a freelance editor.

The other day I came across five fieldfares in a cardboard box in my attic. I mentioned this to Mark, and he immediately asked me to write a guest blog. I should have known better.

Before I go any further, I should explain that these fieldfares will not generate a record for the BTO’s Winter Thrushes Survey. They are five issues of a magazine produced by Bristol Grammar School Field Club in the late 1960s and early 1970s. I was a member of the club at the time, and I told Mark of my discovery because a certain M. I. Avery was another keen member, and a prominent contributor to Fieldfare.

Those little duplicated magazines contain what is probably Mark’s earliest published work. No internet, and no blogs, in those days. At the age of 12 he was writing about the birds around his home in Pensford, Somerset; a couple of years later he described a holiday on Islay; and in 1975 he not only edited the magazine but also wrote three articles – on the 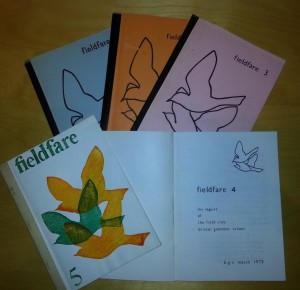 feeding ecology of finches (what an interesting bird the linnet is!), the physics of bird flight, and ‘a popular guide to the birdwatchers of Britain’, which includes detailed field descriptions of species such as Ornithologus scientificus and Twitchus vulgaris. Mark himself showed all the characteristics of the latter in those days, although today the ID is a little less certain.

The range of articles in these magazines (not all written by M. I. Avery) is quite impressive – accounts of birdwatching holidays, reports on the bird life of a local patch, rarity records, book reviews, items on topics such as training to be a ringer, aberrant plumage and preserving birds’ skulls … There are reminders of how much has changed since those days, too. The issue for 1971 contains two articles on relative newcomers – the collared dove (unknown in the Bristol area just ten years earlier) and the North American ruddy duck. The latter ends with a comment that ruddy duck numbers on the Somerset lakes ‘may be expected to increase. Whether this is for the better or worse remains to be seen.’ Let’s see, shall we …

Each issue also contains a mind-boggling list of meetings, outings and other events. In 1972, for example, we had a total of 10 indoor meetings, including several talks by distinguished visitors (there’s quite a roll-call of famous names here including Robert Gillmor, Eric Ennion, Jeffery Boswall, WB Yapp and Colin Bibby) and 19 field meetings, mostly all-day Sunday outings to places within 40 miles of Bristol, but also two weekends away, one in mid Wales and one based on the Exe estuary. All that activity must have taken some serious organisational effort by the two teachers who ran it all, Derek Lucas and Tony Warren. We owe them a lot.

One of the regular events was the annual competition for schools organised by the Wildfowl Trust (now the WWT), which was held in March each year. Several schools sent teams, and the great rivalry was between Bristol Grammar School and Leighton Park School, Reading. We worked in pairs, but there were also individual and team prizes, presented at the end of the day by Peter Scott. We walked around the grounds of the Wildfowl Trust at Slimbridge being tested on our wildfowl knowledge. It was mainly about identification skills, but over the years it expanded somewhat into matters of ecology and conservation. In 1970 M. I. Avery came 32nd in the under-14 age group. Two years later he must have done his homework, because he was placed second, and in 1973 he won the over-14 division. My own performances were more modest (though I never plumbed the depths of 32nd place), but I did learn a lot about wildfowl, some of which has stayed with me. For example, the easiest way to identify a female duck – look at the nearest drake. 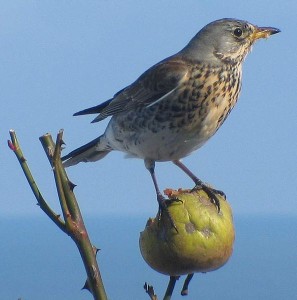 It’s fascinating to come across this sort of stuff from your past. I hadn’t seen these magazines for decades, and yet I still clearly remember many of the outings and meetings, and I remember writing that article, and doing that drawing … Above all, though, finding these old Fieldfares has got me thinking about what the Field Club did for me, and for Mark, and for many others, and what a pity it is that there isn’t more of that sort of thing in schools these days.

Last November a guest blog here by Mary Colwell lamented the fact that fewer and fewer young people are actively engaged with the natural world, and discussed the possibility of a Natural History GCSE as a partial solution. And then a few weeks later Findlay Wilde chipped in with his take on the same topic. Findlay is even younger than Mark was when I first met him, but he seems to be every bit as keen and knowledgeable. He made a plea for school lessons on wildlife and conservation, and a regular ‘nature day’ in school once a month. Are you listening, Mr Gove?

The value of a school field club or natural history society is referred to in the first chapter of Mark’s book Fighting for Birds. (Has Mark mentioned that he had a book published last year? I know he’s very shy about such things, so I’d better mention it for him.) Some of my friends from those days went on to illustrious careers in zoology and/or conservation, while for others of us it remained an amateur pursuit – but the influence of the field club was nonetheless great. I’m not saying that BGS Field Club was solely responsible for Mark’s career, or for my own lifelong interest in birds and other wildlife, but it certainly helped to give us a firm push in the right direction.