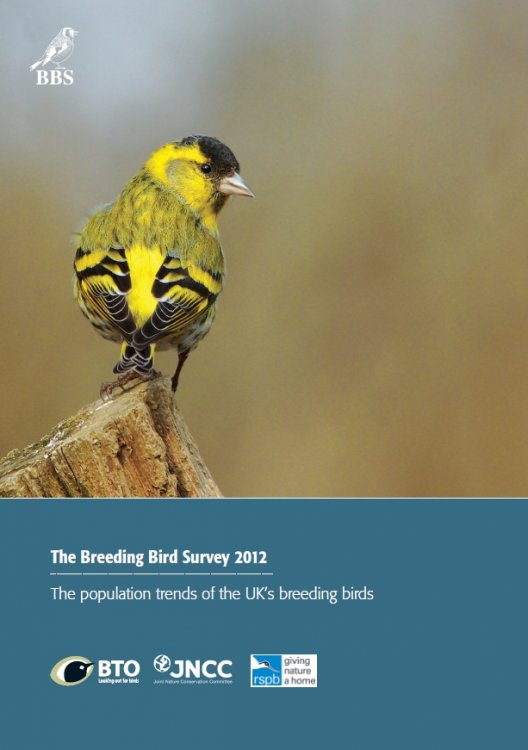 The results: the results are the most important part of the report.  You should look at them, but here are some of the things that struck me, mostly concerning the long-term trends rather than the 2011-12 changes:

The report: the report is very well designed.  Considering it has lots of number-heavy tables (which I love! I’m not complaining) it looks very attractive and is readable.  This takes quite some thought to achieve and it is, again, well-achieved here.

I have two more detailed comments to make on the presentation of the report.  One is a niggle, but not a criticism as I think I understand the reason behind it, and the other is somewhat pedagogical in nature.

And now let me get this next point off my chest too – it’s not a complaint.  If you look at the graphs in the report (of population index against year over the period 1995-2012) they are very interesting.  Have a look at the greenfinch graph on p12 for example.   I love graphs!

Going back quite a while, the BTO used to get graphs ‘wrong’ in this and other publications.  They went through a phase of just giving us a line of best fit but not showing us the data to which the line had been fitted.  This is shocking behaviour and I am glad that it has ceased.  Just because one has a programme (or program) that will fit a line to any data doesn’t mean that you should, and even if you do, you certainly shouldn’t leave out the data so that the human brain can’t examine them too.  The variation from year to year is what is interesting – it shouldn’t be hidden.

You can maybe see what I mean if you do look at the greenfinch graph.  There are lots of nice black dots which represent the hard work of a few thousand people like me (and you?) and then there is a trend line fitted in the twinkling of an eye by some computer programme.  The graph is an interesting one, and I’m very glad to see it, and the line of ‘best’ fit isn’t a bad one – it curves beautifully likes Marilyn Monroe’s hips – but I would question whether it is the best line for those data.  And like Marilyn’s Monroe’s hips, it is a bit distracting – but I am made of stern stuff and am not easily distracted.

The line of ‘best fit’ portrays the highpoint of the greenfinch trend (2006) as a bit of an outlier whereas, in my opinion, there is a ‘better fit’ line that follows the trajectory of the 1995-2005 increase and then plunges more sharply down after 2006.  The actual points on the graph, the real data, suggest that greenfinches were increasing, gradually, year-on-year, right up to and including 2006 and then something happened – and the population started to decline sharply before the 2007 counting season.  But the line of ‘best’ fit would tell you that greenfinches started to decline in 2006, in fact they may well have been thinking of declining and trying to decline in 2005 – it moves the decline point by two years.  The dots are ‘real’, the line is a computer programme attempt to describe the data.

I feel better for that too – and part of the reason for making this overly long point is that it’s really good that the graphs are very clear so that we can see what actually happened. There is a place for fine curves – Marilyn Monroe was a very fine place for quite a few – but I’m glad we can see our scruffy data too.

The logos: just have a look at the logos of the three organisations supporting the BBS.

The BTO logo (hardly ‘new’ any more) looks good.  It’s friendly and birdy, and has, in some strange indefinable way, a touch of humour to it.

The RSPB logo is new, but since it has hardly changed it seems hardly new!  However, it struck me that the new strapline ‘giving nature a home’ looks at its most twee (tweeest? twee-est?) on the cover of a report such as this.  But that means that it will look right in lots of other circumstances, I guess.  But maybe they are circumstances where I won’t see it much.

And then there is the JNCC logo.  I bet hardly any reader of this blog really knows what the JNCC is, what it does or why it needs a logo.  I, myself, wonder sometimes.  And I’d be surprised if, at this size, on this post, you can tell what the logo is trying to do. I’ve got it now but I did spend some time trying to work out what that white (sometimes dark) shape was – until I realised I should be working out what those three black (sometimes light) shapes are.  It’s probably just me, but I dislike generalised birdy shapes (particularly dove-like generalised birdy shapes for some strange reason!). And is that a leaf – I’m not sure (it might be a plaice!)?

The changes for next year: how exciting! I’ll have to do something a bit extra and a bit different next year (well it’s voluntary but I am a participant in life so I’ll probably give it a go).  The BTO (and new-logoed partners) are asking us to record whether we first record birds by sight, call or song in order to calculate bird densities more accurately.  This will mean a bit more data entry for me (and you if you survey a square) which might make people moan a bit but it goes with the territory (as it were).

The more data entry is done by the observers, as volunteers, the better.  The better because we are the people most likely to spot any typing errors (my data entry errors on BBS usually come from not remembering the species codes and ending up entering a gannet instead of a greenfinch – don’t worry these are always (?) corrected.  But also the better because data entry costs money. And just as I am paying for the fuel that gets me to my BBS squares I am contributing my time freely to the data entry – this generates a huge saving for the organisations involved and should speed up everything a lot.  If you are still wedded to paper, please get divorced and choose to enter your data over the web.

A few thank yous: the BBS is a great monitoring scheme and I’m pleased with the part I played in helping to set it up (see Fighting for Birds Chapter 4).  It’s traditional to recognise the contributions of the volunteers at this point, often in a rather cringe-making way, but we just love getting up early, spending our time and money and seeing birds, so no thanks are needed.  Instead I’d like to thank the BTO for their work, especially, I guess, Kate Risely who is the current BBS National Organsier (but also all others involved).  And let’s remember the funders too.  Some of our taxes are well-spent through the contribution of the JNCC to this work and I’m glad that that happens.  Also, the RSPB is a major funder of this work and has been since the start of the BBS (in fact, before the actual start) – I know this because I had to find the money out of ‘my’ budget and it wasn’t always easy.

I’d also like to thank my regional BTO organsier, Barrie Galpin – Barrie is great!  I only met Barrie for the first time at the BTO Conference at Swanwick last year but he has been telling me what to do for years.  He is very good at sending around emails,  personal emails and general reminders, to us all that we ought to be getting ready for the next census challenge.  And he’s great at feedback too.  After I enter the data online I always get a message from Barrie which shows that he has noticed that I have done my bit and always demonstrates that he has had at least a quick look at the records too because he comments on interesting sightings. So thank you Barrie, and all the other regional reps (even if they aren’t all as brilliant as our Barrie).  There’s a list of Regional Reps at the back of the report and I recognise quite a few names.  There are not enough women’s names, although a slightly higher proportion than I expected, so maybe that is an area which is improving.

If I write much more it’ll be time for next year’s survey! The most important thing is that we are privileged to have such a wonderful, reliable, annual snapshot of the state of the populations of commoner bird species.  It’s fantastic!  The BTO is fantastic!  We birders are fantastic!