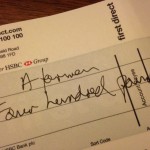 I like Charles Clover but I don’t (by any means) always agree with him.

His column in today’s Sunday Times is entitled ‘Greedy farmers a-milking it, no turtle doves and no partridges either‘ and describes Peter Kendall as ‘the cocky ambassador of agri-business‘.  Wow! Even I am more polite about PK than that!

Charles Clover, not a fellow traveller of mine on the Left of politics writes along the very same lines as my earlier two blogs of today: susbidies are bad, countryside wildlife needs help, the government should be looking for payments to farmers to deliver public benefit rather than private wealth and the government should not compromise on its promised 15% shift in payments.

As I wrote earlier – it’s very difficult to justify the present scenario whatever your politics or view of life.  Only the recipients of unjustified subsidies appear to be shouting loudly for their retention.

David Cameron will look like an NFU poodle if he budges by even a half a percent from the 15% modulation.

Assuming that David Cameron isn’t already having a snooze – why not give him a nudge here.