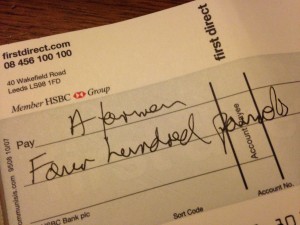 Although the NFU says that it has written to every MP on the subject of CAP reform they don’t put that letter (or those letters) on their website as far as I can see.

What they do say on their website is that they are ‘increasingly infuriated‘ with the government position.  Only the farming industry would have the nerve to say that their competitiveness has to be underpinned by handouts from the taxes of freelance writers, nurses, refuse collectors, rural postmen and teachers.  If we are looking at competitiveness then the efficient don’t need handouts and the inefficient shouldn’t get them!

There is a case for real income support for some types of farmers, but the current system gives most of the Pillar 1 money to people who don’t need it and shouldn’t get it.  Of course, farmers don’t want to lose their handouts – who would? – that’s why they are sounding increasingly desperate.

And, none of this money disappears from farming.  We taxpayers don’t get any money back if the Prime Minister backs Owen Paterson’s recommendation of 15% switch from handouts to environmental payments (although it isn’t quite that simple, but I’ll come back to that in a while, if I must).  No, what we get is that warm glow of knowing that a small part of the CAP payment to farming is delivering a public good – a better environment – rather than topping up private income.

Neither major political ideology supports the current system.  The Left (wherever they are these days) doesn’t approve of so much money going to the undeserving (as well as the deserving) and the Right just doesn’t like so much state intervention full stop.  Only some farmers and their cronies (does that include David Cameron?) attempt even to defend a system which promotes inefficiency and unfairness all at once.

So if my MP, Andy Sawford, has received a letter from the NFU, I would just ask him to think how many of the inhabitants of central Corby would have sympathy for the NFU position?

And as David Cameron ponders the way forward (or is he relaxing?) then he is probably thinking that in political terms this is payback time. Rarely do governments give any side of any argument all they want.  Farming has asked the government to back it in a ridiculously misjudged badger cull – and has received Owen Paterson’s unstinting, nay, enthusiastic, support throughout, despite public uproar. If Cameron wants to look as though he is in the pocket of 55000 English and Welsh farmers then he should reduce the amount of modulation from the 15% recommended by Defra.  But if he wants to stick to the Right’s ideology on state intervention, if he wants to do a ‘green’ thing for once in his tenure at Downing St, if he wants to back his choice as Secretary of State at Defra and if he wants to look like he is independent of the farming lobbies, then he must stick to 15%.  And then Prime Minister, have a little nap – it’s as simple as that.

Assuming that David Cameron isn’t already having a snooze – why not give him a nudge here.