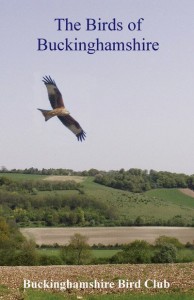 Although this is described as the 2nd edition of the book of 1993 it is much, much more than just a revamp.  This edition includes data from the recent atlassing frenzy and so it is pretty much up to date (and was published in 2012).

Buckinghamshire is one of those mysterious counties as far as I am concerned.  I never go there on purpose, but sometimes realise I am in it!  I am always passing through and have only the vaguest notion of its geography.  Milton Keynes is in Buckinghamshire – where else is? Princes Risborough, Winslow (with its boys), Chesham and Gerrards Cross.  It’s completely my fault that I am so ignorant of Bucks – but I am.

There are lots of people, lots of birders and a few birds in Bucks.  This book does a good job in telling you about the birds.

I was interested in the lists of breeding losses and gains: 10 species have been lost since 1900, eight of them in the second half of that period (Stone Curlew, 1964; Red-backed Shrike, 1971; Whinchat, 1983; Cirl Bunting, 1984; Wryneck, 1985; Wood Warbler, 1992; Redstart, 1997 and Stonechat, 2003) – I was surprised by how recent some of these losses were. On the other side, 21 species have been gained as breeding birds and six of those have been since 2000 (Oystercatcher, Herring Gull, Black-headed Gull, Lesser Black-backed Gull, Goosander and Peregrine).  Three more species have come and gone – Lady Amherst’s Pheasant, Ruddy Duck and Dartford Warbler.  I predict the Dartford Warbler will be back.

There is an interesting bunch of graphs concerning arrival dates of migrants.  Most are getting earlier, but the authors rightly point out that this might be due to increasing effort (more birders0 or better reporting (better behaved birders)). Either may play a part, perhaps the main part, but I’d doubt that the c3 weeks earlier arrival of the House Martin is due primarily to those factors.  I’d guess, and the authors seem to agree, that climate change is partly involved.  Of course, those species that are increasing in numbers (some are and some aren’t in those displayed) are likely to have slightly earlier arrival dates too – if you tell 5 people to arrive somewhere at noon and 50 people to arrive at noon, the earliest arriver is usually going to come from the 50.

Likewise, those species which are declining in numbers tend to show later arrival dates or at least not earlier ones. The Turtle Dove is now seen arriving in Bucks later in the year – I guess that is simply because there are very few of them around now.

There are other interesting synthetic analyses and essays in the book although most of its bulk comprises species accounts.  These are exactly what you would want if you live in Bucks – and make interesting reading.  For a non-resident they are also interesting and simply ram home the message, that we all have nationally, that some species are doing very badly and others, often non-native species, are doing very well.

If you are plugged in to the birding news then the decline of birds such as Spotted Flycatcher and Corn Bunting, and the increase in Red Kites (thanks to reintroduction) and Egyptian Goose (an introduction), are not news.  But they and other national trends are well-illustrated in this book.

David Ferguson edited this book – and he and his co-workers did a good job.