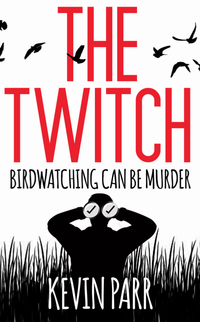 This is one of two books I bought in Oxford the week before last.  The first was in the shop window and caught my eye so I went inside and then this cover and title caught my eye so I bought it too.  Both purchases were testaments to the power of advertising – or communication.  If they hadn’t promoted themselves I wouldn’t have known that they existed and I wouldn’t have bought them.  I’m very glad that I bought The Twitch – it’s a fun book.

It’s also a rather ‘laddish‘ book – there is plenty of illicit sex, drinking beer, driving too fast, chasing rare birds and killing people.  How unlike the lives of the members of the 400 Club! Any of us who has combined at least a couple of these pursuits might well enjoy this book.  It did make me wonder whether there is anyone in the UK birding scene who, like the anti-hero of this entertaining tale, has been ‘involved’ in all five of those activities.

It follows a man obsessed by the annual competition to see more birds in the UK than anyone else.  It has pace and humour and suspense and twists – and it is all about birds and birders.  It is an undemanding but enjoyable read.

The author left his job to write this book, which takes a lot of nerve and I wish him well with it. He is a fisherman who writes about angling but seems to have come across the strange world of twitching fairly recently.  Rather than become a twitcher himself, he decided to write about it, and we should thank him for this fictional treatment which only exagerrates the truth a little.

The author gets the birdy and birding bits right most of the time. To my mind there are just a few phrases and bird records which could have been slightly tweaked to be even more authentic but that is really a minor quibble and an indication of how very convincing most of the book is to someone who knows a bit about birds and birding.

This book will appeal to the laddish, those who are reformed or active twitchers, many normal birders and it deserves to be read as a cracking tale by those who would never think of going on a twitch in their lives.

The Twitch by Kevin Parr is published by Unbound and is available on Amazon as is Mark Avery’s Fighting for Birds, and A Message from Martha which will be published on 10 July.  Unbound is a very interesting outfit which publishes books supported by the public – I might give it a go sometime.

4 Replies to “Sunday Book Review – The Twitch by Kevin Parr”