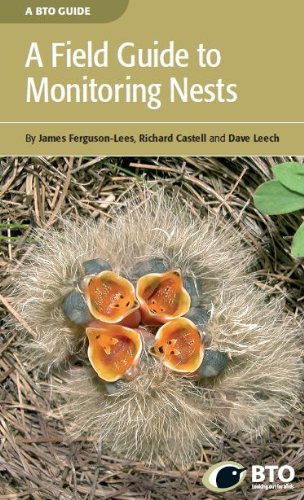 I’m rubbish at nests and eggs.  I have little experience in finding them and am usually pretty clueless at identifying them when I do stumble across them.  This, then, is a book for me.

The book is a handy size to take into the field.  Each of 146 British breeding species gets its own account giving details of eggs, nests, nest sites and nesting seasons.  There are also tips on how to find nests.

The book is ‘technical support’ for those who collect data for the BTO Nest Record Scheme.  I was inspired by a talk given by the third author of this book at a conference earlier in the year and now I am on the look out for a few nests from which to record data.  This book tells you which species are priorities for the scheme, what data are most valuable and how they might be used in the future.  It’s a classic case of how your (or my) very few records can help build a much bigger picture when combined with the data from others whom we have never met or even heard of.

I was struck at a talk given by one of the authors a few weeks ago by how few nest records there are for some pretty common species for some pretty well-populated counties each year.  More data would definitely be better.

My gripe, a fairly minor one, is that the photographs of eggs and nests are rather small – rather too small to be as helpful as they could be.  This is  partly an unavoidable consequence of the small, handy, size of the book but isn’t helped by the inclusion of photographs of the birds themselves and distribution maps of all species.  I can’t be alone in knowing quite a bit about bird identification (more, certainly, than these photographs will tell me) and quite a bit about bird distribution in the UK (more certainly than these maps will tell me) but very little about how to tell a Chiffchaff nest from a Willow Warbler nest – am I? But this book does give a lot of clues as to how to distinguish the nests of those two widespread and similar-looking species and I was interested in the answer.  That’s the type of thing I would expect from this book and there is a lot of such information here.

This book isn’t cheap at £24.99 + P&P but there isn’t anything else quite like it.  It’s available directly from the BTO.