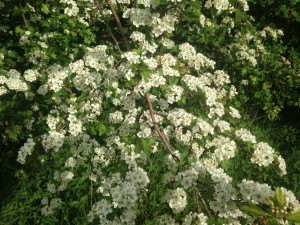 I had to walk across an allocated 1km square and record which plants out of a list of 200 I saw.  Luckily, the list has such challenging species as Holly, Hawthorn, Common Nettle, Ivy and Daisy so I knew I would be able to identify some of them.

The good thing about walking across the square is that you then have to walk back – so you get a second go.  The particularly good thing about this square, and, remember, they gave it to me (I didn’t ask for it), is that there is a pub at the far end of the walk where one can sit in the garden and look at plant books to figure out any identification puzzles.  I’ve only visited this square once and I really like it already!

I should tell you what the square is like, I guess.  Well, it’s in the valley of the River Nene, so much so that I crossed the river about half way along my stroll, and is a bit of arable farmland and a bit of scrubby, nothingy, messy stuff around the river.  I must clean up the habitat definitions before I send in my data to Plantlife.

I’d already worked out a route on rights of way before we set off but attempting to walk them revealed a feature of the British countryside – some of them weren’t really there.  But some other paths, well-used paths, were there. It was fine really.

There were some birds, but I wasn’t allowed to pay much attention to them as I was concentrating hard on spotting a plant or two. Although, I have to mention that there was a Cuckoo singing for much of the walk – there really are more of them around this year, I’m sure.

The documentation for the survey is pretty good – although I would have a few suggestions as to how it could be improved.

And I felt heroic looking at plants in May when there are plenty of birds to look at.

I also felt like a complete novice – which was a strange mixture of slightly unnerving and rather exhilarating.  But I am familiar with talking to people about birds and them saying ‘Oh, I don’t know anything about birds or how to identify them’.  I quite enjoy this as it is usually untrue, and I play a little game by saying ‘I bet you know [name a bird] don’t you?’ and the person will say ‘Oh yes! I know that’. And then one can say ‘And you know [name another bird], don’t you?’. And they usually say ‘Oh yes!’, and I can often get into the 20s before they admit to not knowing what a particular bird is like. I suppose my plant knowledge, poor though it is, is not completely absent – I do know a few, in fact quite a few, plants (although I do hide this knowledge very well).

We recorded 20 of the 200 target species on our walk.  I don’t know how many we missed. With birds, I would be fairly sure (although – who really knows?), on a similar walk, that I would have heard or seen and correctly identified most of the species in view or in hearing.  Although plants can’t fly away they don’t exactly jump out at you either, do they? They just sit there looking rather green – almost all of them.

We must return, during opening hours of the pub I suspect, some time in 6-8 weeks so I suspect that will be in mid-July, to see what other species we might find on our route that are then in flower or at least more obvious than they were on Saturday. And, do you know, I am quite looking forward to it.