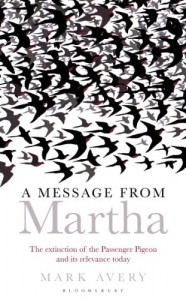 The current month’s Birdwatch has extracts from my forthcoming book A Message from Martha: the extinction of the Passenger Pigeon and its relevance today.

I’ve been touched by how many people have emailed me, after reading Birdwatch, to say that they are definitely going to buy it.

The book looks at the story of the Passenger Pigeon  – its former immense numbers in the forests of the eastern USA and its rapid fall to extinction.  On the 1 September 1914 the last Passenger Pigeon on the planet, called Martha, died in Cincinnati Zoo.  Only a matter of decades before, this bird was present in billions – it was the commonest bird in the world and around one bird in every three in north America was a Passenger Pigeon.

The biology of the Passenger Pigeon was unusual – and was probably partly responsible for its downfall.  It lived in huge flocks and nested in huge colonies – like nothing you can now see on Earth.  The flocks were of billions of birds and the colonies of tens of millions of nests.  And yet, they are all now gone, and have been for almost exactly a century.  I explain how I think we drove the Passenger Pigeon to extinction in the book. It wasn’t as simple as ‘we shot a lot of them’ although, we did shoot a lot of them. 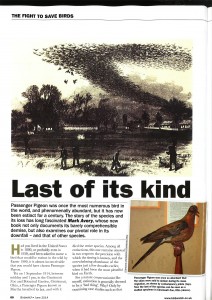 Rather few continental birds have been driven to extinction  – most extinct birds lived on islands, and quite a few of them were flightless too.  But the Passenger Pigeon was North America’s ‘top bird’ for centuries until Europeans came to the New World.

The late nineteenth century was a time when many other species in the USA were driven to extinction or had very close escapes.  The Bison was reduced to just a thousand or so individuals at the time when the Passenger Pigeon was still numbered in millions.  I tell this broader story of exploitation and environmental destruction, in which the Passenger Pigeon was just one casualty, through the events in the life of an American woman, whose parents were immigrants from Scotland and England, and whose name was also Martha.

But does it matter? Should we regret the loss of the Passenger Pigeon? Are we any worse off for its extinction?  I think that is the wrong question, and the book gives the right question and my answer to it.

Does the loss of the Passenger Pigeon have any relevance to our situation in the UK in 2014 – a century after Martha died?  I believe it does.  We are not losing a Passenger Pigeon, but Europe is losing a huge number of birds from the farmed countryside and that is the issue for our age.  Will the Turtle Dove be lost from much of Europe, including the UK, in just a few short decades? This would have seemed inconceivable a short time ago – just as the extinction of the commonest bird on the planet had seemed impossible to those who cut down its forests, shot it and ate it.

When the Passenger Pigeon was driven to extinction there were excuses – we understood far less about the natural world.  Now we know enough – do we care enough to do something about the loss of wildlife in our country and on our planet?

A Message from Martha is published by Bloomsbury on 17 July but you can pre-order it from the Birdwatch bookshop and get it for a reduced price. 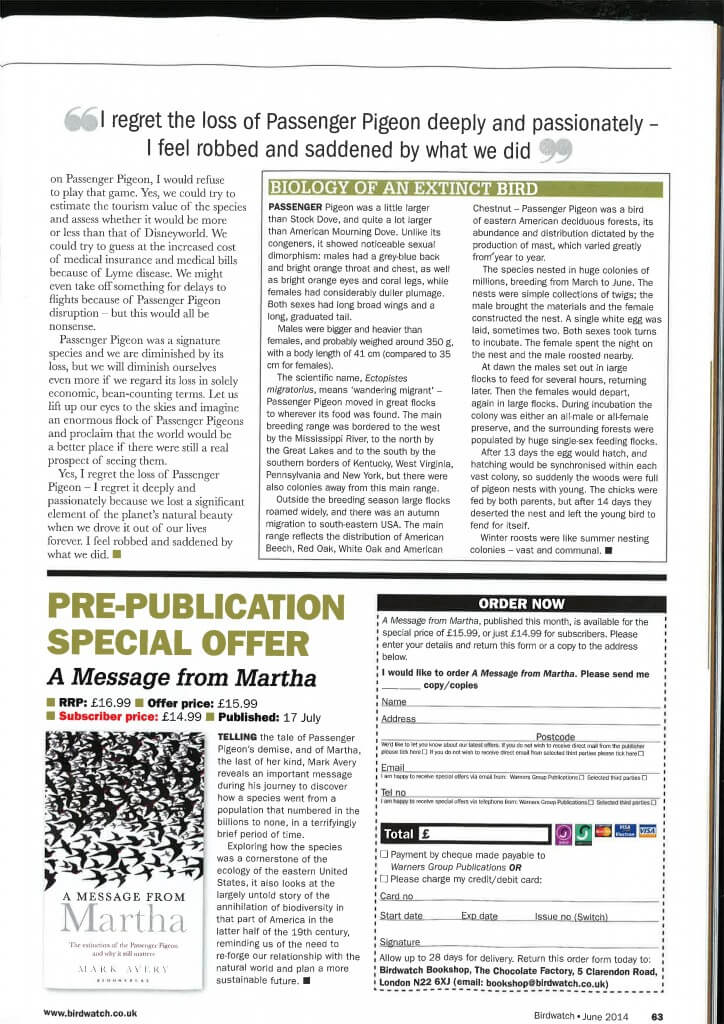