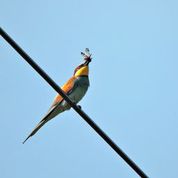 Good news from the Isle of Wight – the pair of Bee-eaters (the first to nest successfully in the UK since 2002) have fledged four young.  That’s pretty good going out of the seven eggs they normally lay.

Let’s hope the next few weeks are sunny and insect-filled and they fuel-up for their journey south to Africa.

Will they be back next year? Past experience suggests probably not, but you never know and let’s keep our fingers crossed that they do. Bee-eaters would be a beautiful addition to our regularly breeding species.  Not only do Bee-eaters look good (nothing subtle about their attraction) but they have a lovely fluty call (pruit- pruit) and an interesting social life (which I studied years ago in the Camargue – see Fighting for Birds Chapter 1)).

If you visit a colony of Bee-eaters late in the season, and look closely, you will find that the young in some nests are fed not just by a male and a female bird but by others too – usually an extra male or an extra two males (rarely females). Who are these birds and why are they ‘helping’?

If you spend years studying Bee-eaters, or read the next few words, you will discover that these extra helpers are relatives of the pair whose nest it is, and therefore relatives of the chicks in the nest.  Your studies would also reveal that the helpers have usually nested themselves earlier in the year at the same colony but have lost their own young – perhaps to predation by snakes or weasels, or perhaps to starvation in periods of poor weather (and few insects). If it’s too late for a failed pair to have another attempt at nesting then they may end up helping at other nests – usually of their parents or brothers.

So why, you may ask, is it usually males that help? Surely they are not, like in humans, simply the more helpful sex when it comes to bringing up children? No, it’s because in Bee-eaters, as in most (but not all) birds, males return close to where they were born and females disperse further away. Thus males are more likely to be nesting at a colony where they have relatives whereas females leave home to a greater extent.