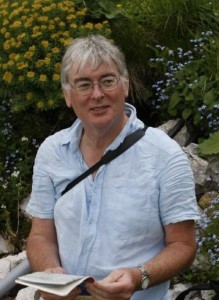 Peter Marren is the first person to have their third Guest Blog on this site (see here and here for his previous Guest Blogs).

Peter used to work for an excellent organisation called the Nature Conservancy Council (who remembers them? – and yes we didn’t always think they were excellent at the time but how we might wish them back…).  He now writes books and excellent articles (especially for British Wildlife magazine).

Where green objectives clash: nature versus renewables at Rampisham Down

Which is the most important: nature conservation or renewable energy? We are about to find out. The place where the issue will be decided is Rampisham Down, near Maiden Newton in Dorset. The place is best known for its nest of communication masts which have disfigured the skyline there since 1939. But underneath the masts is a surprise. This is an unusually large area of dry semi-natural acidic grassland of the kind technically known as U4. It is an unusual kind with a mixture of acidic and chalk plants. Quite by chance the masts have saved this grassland from the fate of nearly other example in the county: fertiliser and the plough. There is less than 5,000 ha of this kind of grassland left in Britain. 76ha of an unusually species –rich kind lies under the masts at Rampisham Down.

Natural England scheduled this site as a Site of Special Scientific Interest (SSSI) in 2013. It did so partly in response to a threat. The site had been bought for British Solar Renewables with the intention of turning 40 ha of it into a solar farm – one of England’s largest with more than 100,000 (some say up to 160,000) panels. When the application went to West Dorset District Council in November last year it was opposed by Natural England and Dorset Wildlife Trust. The District’s Planning Officer recommended refusal. The Councillors thought otherwise and approved the application. Unanimously. Now Dorset Wildlife Trust is asking the Secretary of State, Eric Pickles, to call in the case for a Public Inquiry. With the general election on the way there is no time to lose.

That’s the case in outline. Just beneath the surface lie a number of issues. First acid grassland is not the easiest habitat to ‘sell’. To anyone except a botanist, Rampisham Down is a rather bleak spread of rough grass on a rounded hilltop broken by the odd gorse bush or shelter belt of pines. There is no public access. The whole place is behind barbed wire with multiple warning signs – including guard dogs. Local feeling is mainly one of relief that the masts are coming down at last.

The second problem is that West Dorset’s planners class this as a brownfield site. For brownfield sites there is, in general, a presumption in favour of redevelopment. At the meeting to consider the application, which, of course, was public, the Planning Officer repeatedly reminded Councillors that this does not apply to protected sites like Rampisham Down. Nevertheless some Councillors felt able to question its nature conservation value. One pointed out that herbicides and fertiliser had been used there (so they have, but only on small areas, such as around the masts). There was also a fear that the area might ‘go to scrub’. Many people seem terrified of that outcome but there are ways of preventing scrub encroachment, one of which is called sheep.

Unfortunately the Councillors seemed more impressed by the developer’s evidence than Natural England’s. They were able to produce Sir Ghillean Prance, a distinguished botanist and former director of Kew Gardens. In Sir Ghillean’s view, the site was “degraded, highly impacted habitat”. Moreover, in his opinion the site’s interest would survive the installation of 100,000 solar panels since these now have windows that let a little light through to the grass underneath. The developers had performed some experiments which suggested that, after six months, there was no discernible difference to the vegetation. Natural England responded that six months is nowhere near long enough, but Sir Ghillean seemed impressed with the results and so, apparently, were the Councillors. There was even a suggestion that development could somehow improve the value of the SSSI though no evidence for that was forthcoming.

Like most conservation bodies, the Dorset Wildlife Trust is an enthusiast for renewable energy. The land purchased by the developers includes a smaller area on the opposite side of the road which is improved grassland, formerly part of a dairy farm, of minimal value for wildlife. The Trust supports this alternative and it is also investigating suitable sites for solar farms elsewhere in the county.

A final reason why the application was approved is the local councillors’ fear of windfarms. Like everywhere else, Dorset has been set targets for renewable energy. Windfarms are deeply unpopular in West Dorset. Like the communication masts on Rampisham Down you can see them for miles in this countryside of rounded hills and deep valleys. Better solar panels, you might think, than three-hundred-foot wind turbines.

These are some of the questions Eric Pickles’ officials should consider: was the District right to ignore its Planning Officers’ recommendation? How compatible are solar panels and grassland wildlife? Should natural grassland be demoted to ‘brownfield’ simply because it has man-made structures on it? Should the evidence of a star witness outweigh that of the Government’s own advisors on wildlife and the county experts? Is it right that ‘Cinderella’ habitats like acid grassland should weigh less than more glamorous sites, especially when they don’t have any Nightingales? And finally, if the application is confirmed, where does that leave the Government’s National Planning Policy Framework?

It is all down to Mr Pickles now. Quite a lot may hang on his decision.

Follow the Rampisham Down affair in detail on Miles King’s blog.