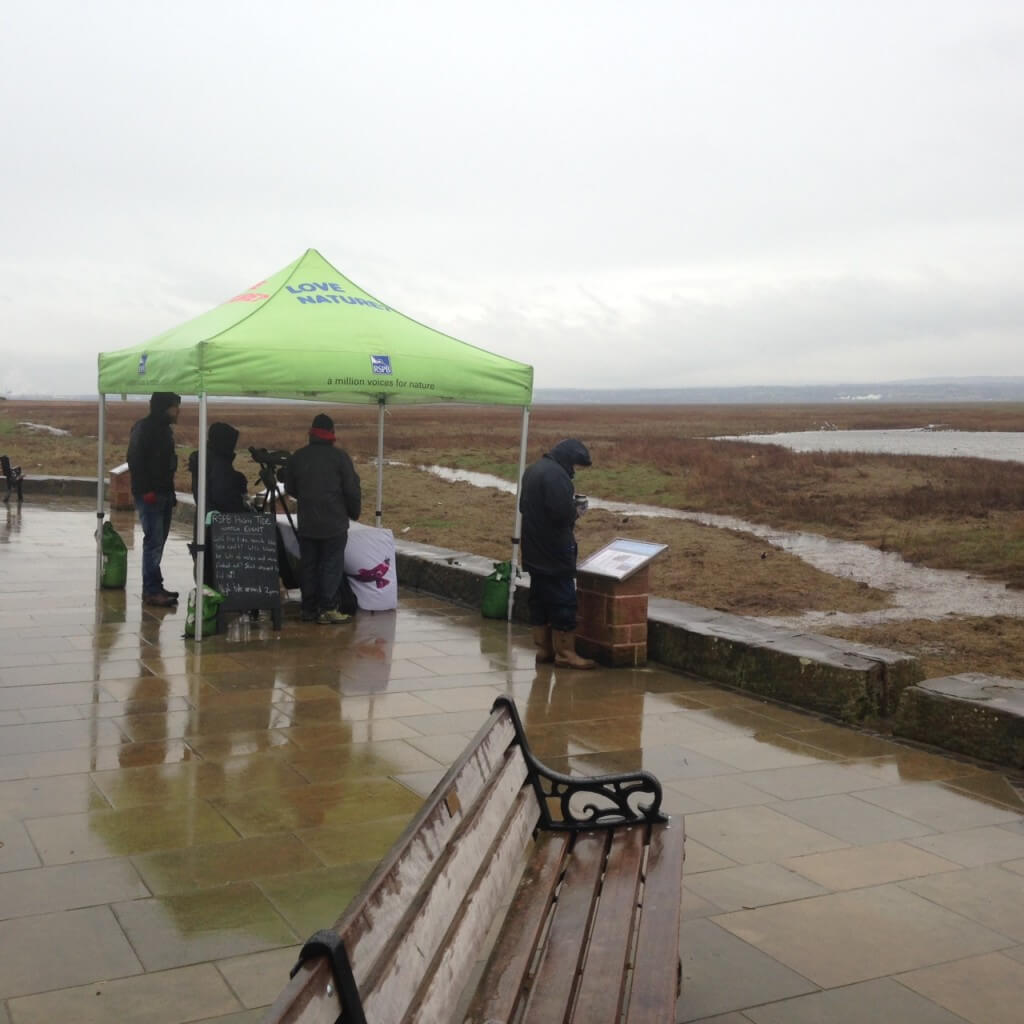 Birdwatching is such a laugh. Standing for 4-5 hours in the rain (which occasionally turned to sleet just to show how cold it was) and a biting wind is our idea of fun.  I blame that Findlay Wilde for having a birthday and luring us all there with the promise (richly fulfilled) of cake.

But to celebrate Findlay’s birthday, the RSPB had what we used to call a ‘showing people birds’ event coinciding with a high spring tide and a rugby-free weekend. It was, of course, the lure of the chocolate cake that really did it, but a few birds would be good too.

I’d never been to Parkgate on the Dee Estuary before, I’d hardly ever been to The Wirral really (it isn’t on the way to anywhere after all – that is rather the essence of a peninsula).

There were birds about – aren’t there always? There were Little Egrets and Teal, Oystercatchers and Lapwings, and a few of those irritating and generally quite unpleasant Linnets too. But the best bird, honorary bird, was probably the very large Brown Rat, which already looked like a semi-drowned rat, but he (or she) may have thought the same about us, as the rain was pretty well incessant.

There were not many ‘ordinary people’ passing by, and most that did, were hunched against the wind and just looked at us as if we were a bit bonkers – it was hard to disagree with them, really.

But a growing band of birders assembled and spent more time chatting than looking for birds. We did see a distant Great White Egret amongst the Little Egrets and a Peregrine perched on a post out in the marsh.

We offered to show a passing couple the Peregrine through the telescope. The man looked, and didn’t look impressed. The woman didn’t look as she said she’d seen one before. Crikey! I once had a really delicious steak and that made me think I’d like another one, one day. Then there was that distant glass of Rioja that made me think that one day I’d have another one. I put ‘seeing a Peregrine’ right into the category of ‘I’d like to do that again’ when I saw my first. Still, I’m clearly a bit odd and this woman had drunk deeply enough of the pleasure of Peregrines without wanting to take another sip.  Maybe she goes through life with no repetition, no deviation and perhaps no hesitation. I’m sure you can all make your own list of things that seemed interesting enough the first time you tried them to give them another go – but not Peregrine viewing for this woman.

Most of the people gathered around were birders, and most seemed to be friends of Findlay (and Harley, Heather and Nigel Wilde too).  There were some of the ‘Sodden 570’ and so we were well-accustomed to getting wet together.

As high tide approached, the sleety rain (and rainy sleet) subsided and it was just very cold, rather than very wet and very cold.  The incoming tide pushed the waders out of their feeding grounds and also concentrated the small mammals in the remaining areas of grass.  Three ringtail Hen Harriers passed by heading up the estuary – it was good to see them and wonder where they might have been raised and where they might try to nest.  Considering the amount of time I have spent talking to Findlay about Hen Harriers, it seemed odd that these were the first we had seen together.

The estuary was now as full as it was going to be and not quite as full as it had to be to deliver the most spectacular show when small mammals are running and swimming for their lives as the water rises and they flee to escape drowning and the threat from gulls and raptors above them.  But the semi-drowned Brown Rat made another appearance and ran the gauntlet of a flock of Black-headed Gulls that dived at it. I wonder what they would have done had they caught it?

And I saw the Laughing Gull at New Brighton marine lake at the beginning of the day – another laugher!

You should now ‘like’ this blog and go and read Findlay’s blog too – we seem to be having something called a blog-off!

11 Replies to “A laughing matter”