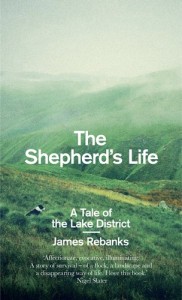 I recommend this book as the antivenom to George Monbiot’s book on rewilding (Feral), and vice versa, for this is a book that will make you like sheep and those who, to some extent, look after them in the hills. It’s a very good read and I enjoyed it very much.  However, this book is highly political in its narrative, though not nearly as obviously or openly as Monbiot’s book.

The Shepherd’s Life is well written and thoroughly engaging. Rebanks’s story is about those who work hard and, it seems, hardly play at all, to make a living from sheep in the Lake District.  The weather is tough, the hills are tough and the men are tough.  Shearing, lambing, sheep-worrying dogs, training your own sheepdog, buying, selling and looking after sheep are all in this book, and the tales are told very well.

And there are plenty of stories about the author’s childhood and the family of characters in which he grew up. They sound a bit curmudgeonly at times, but then so is the weather up in the fells and we keep being told that the sheep people shaped the landscape and it wouldn’t be like it is without them. There is a lot about the traditional nature of how things are done.

These hill folk don’t really like tourists (who are the mainstay of the local economy), and nor do they like townies (who are the mainstay of their agricultural subsidies). It would be easy to come away from this book thinking that the hill folk don’t like anyone who isn’t a sheep (and preferably a Herdwick), isn’t a farmer or isn’t from around ‘these parts’.  ‘What characters they are!’ we are invited to think.

The author didn’t take too much to school and so played a game which involved breaking as much expensive school equipment as possible and passing it off as an accident – how we laughed!

So why do I say this is a political book? Because it paints a picture of upland sheep farmers as if they really are a breed apart – independent, tough and trying to make ends meet by their own sweat and toil – which though it may be true, as far as it goes, doesn’t go far enough.  The purpose of raising sheep is to make money by selling them for meat and their wool and for that you need customers, but the customers’ needs and views never seem to cross the minds of these hill folk.  The disconnect between the supplier and the customer is immense in this excellent story, but it seems that these suppliers thinks the customer has to sympathise with and understand them – a reversal of the usual rules of business.  This is exactly the disconnect highlighted by the Curry Commission report after the foot and mouth outbreak.

This book is about those who own and rent land and so might better be titled ‘The Sheep Farmer’s Life’ but that would position the story much more firmly in the place of farmers being small businesses that have many of the struggles of other small businesses. The difference perhaps, is that the sheep farmer may be as income-poor as a second-hand car salesman or a baker but may be considerably richer in capital terms. But that’s a minor point.

Another difference is that most upland farms are highly dependent on subsidy cheques from you and me, via Defra, via the EU, via the Treasury but ultimately via you and me.  On many upland farms the stock enterprise operates at a loss and it is only the single farm payment (the subsidy) which makes the enterprise ‘profitable’. This is income support from the townies and the tourists to the upland farms that might merit a little gratitude, or at least acknowledgement, but it hardly gets a mention in this book.  There is mention of the man from the ministry who came to the farm to talk to the author’s grandfather about managing the meadows on the farm for wildlife; Grandad told his grandson that the trick was to agree to everything and then carry on regardless. How we laughed!

And the word traditional is used so often in this book – it seems, as a sign of approbation. But something being traditional does only mean that it hasn’t changed much for a long time. It doesn’t mean that it shouldn’t!  The coal mines were traditional and so were the shipyards, and so I guess were the gin-trap manufacturers, but they were all, rightly or wrongly, seen to be part of history rather than the future.  Traditional ways of life, when paid for by the rest of society, are a life-style choice. Sometimes people are trapped in that lifestyle through circumstances, sometimes they choose it through free choice (and examples of both occur in this book) but sheep farming is a traditional business which is now highly dependent on public subsidy so it would just be nice if those who have chosen or are forced to carry it out gave a nod towards the rest of us who are paying for it and then we’d be more inclined to continue to do so.

The book, which is a very good read, takes for granted that keeping sheep is a sustainable way to make money from these hills. It takes for granted that the meat production is of sufficient value to justify this land use. It neglects to discuss the impacts of this land use on wildlife, water quality, flood risk  or greenhouse gas emissions. But it is traditional, and it is, it seems, carried out by people who don’t much like townies and forms and regulations and the rest of the world – although they are not independent enough to turn down their subsidies.

If I were the NFU, I’d give a copy of this book to every MP and hope that they don’t ask any difficult questions about sheep farming. They probably wouldn’t because it is supremely well-written. It captures the toughness of the work and the character of the people very well. I once sheared a sheep, very badly, and had to sit down for a few minutes afterwards to recover and can only admire those who can shear a couple of hundred or more in a day. And I have, in the middle of the night, stuck my arm deep into a ewe to try to find the legs of the lamb she was trying to push out, and the passages describing lambing took me back to those distant and few occasions.  This is a very good read – you feel you are there, with the wind and rain on your face, and the curses of the authors’ farming friends and relations in your ears.  One can’t help but admire these folk – and we should admire them for what they do. But just because these tough people are doing the best they can doesn’t mean that we, as a society of hill folk, country folk and townies alike, are getting the best possible return from our investment in their efforts. And nor does it mean that we should keep sending our cheques to the hills so that they can feel ‘independent’.

The Shepherd’s Life by James Rebanks is published by Penguin books.