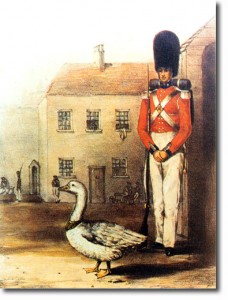 In 1839 the Coldstream Guards were sent to Quebec in our colony in Canada. There, a sentry saw a white goose chased by a fox and wanting to save the goose, but not wanting to alert the garrison by firing a shot, the sentry bayonetted the fox. The goose was very grateful and from that time forward, spent much time with whichever soldier was on duty at that sentry post, marching with the sentries to keep them company.

Some time later, in the winter, the goose, called Jacob by the soldiers (it’s too fanciful to think that this was because these events may have occurred on the Heights of Abraham and Jacob was Abraham’s grandson), was responsible for saving the life of the very sentry who had earlier saved his own.

The sentry post was attacked by a group of men, two of whom stealthily approached the sentry with knives at the ready, their footsteps silenced by the snow. Jacob flew at the men and disturbed them enough that the sentry shot one and bayonetted the other. Jacob and the sentry kept the rest of the intruders at bay until they were arrested by reinforcements.

When word of Jacob’s role in this affray became known the officers of the regiment bought him a gold collar which he wore for the rest of his life, including when he travelled back to London with the guards. Jacob took up sentry duties outside the Portman Street Barracks until run over by a van whilst on duty.

Even the Duke of Wellington himself expressed his admiration and appreciation of Jacob’s devotion to duty.

I came across this story thanks to striking up a conversation with a lovely RSPB volunteer, Roberta (Bobby) Mitchell, yesterday morning in the RSPB library at The Lodge. This account is a summarised version of one which appeared under the name of Roland Blackburn in the RSPB’s Bird Notes and News at some time in the 1940s.

2 Replies to “The military career of Jacob the goose.”